The North Patio is something very special to me.  It was not part of the initial drawings, but was an element of the design that grew organically as the studio took shape.  By opening up some space beyond the booth windows, it helps to balance the scale of the nature that surrounds the building with the rooms that can look out into it.  Moreover, it provides an excellent place to enjoy the beautiful north elevation of the studio, which is not so easy to appreciate when you are knee-deep in meadow.

The construction of the North Patio is relatively straightforward, except for the fact that in addition to the 1000+ sq ft of water run-off that it creates itself, it catches an additional 3000+ sq ft of water run-off from the north-facing roof facets.  All of this had led to some extensive drainage planning and implementation, most of which was completed (for the patio) last week.  This week, then, is the small matter of just preparing the forms into which the concrete will be poured, and then pouring and working the actual slab.  Here’s where we started the week: 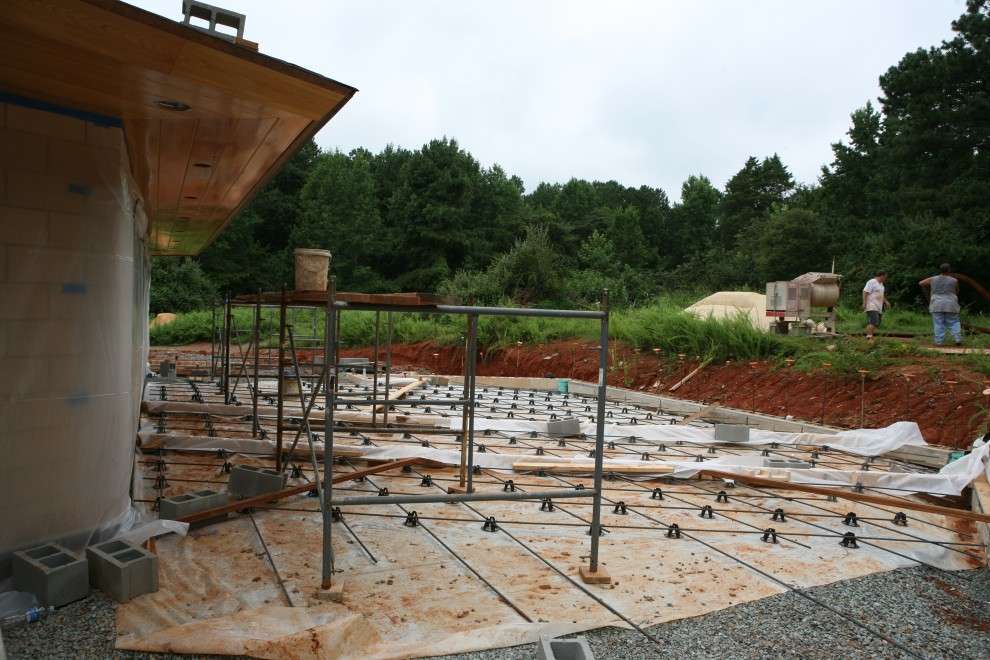 And here is where we finished: 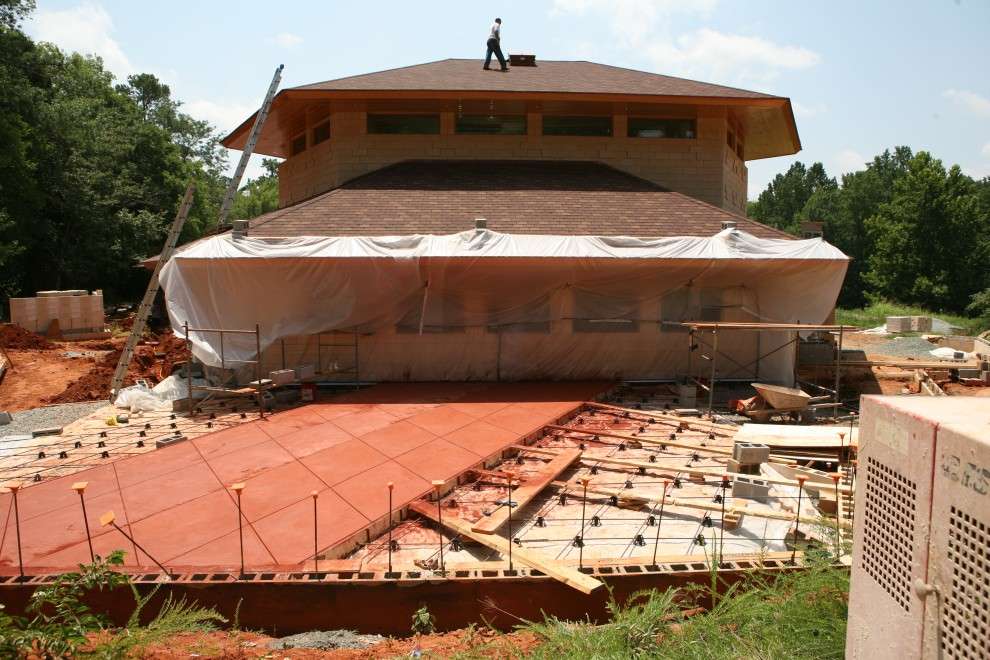 Naturally, there’s much more to this story, and the many other tasks that were completed this week…

Here’s a view that shows the precision with which the rebar is placed, exemplifying the logic of the diamond grid: 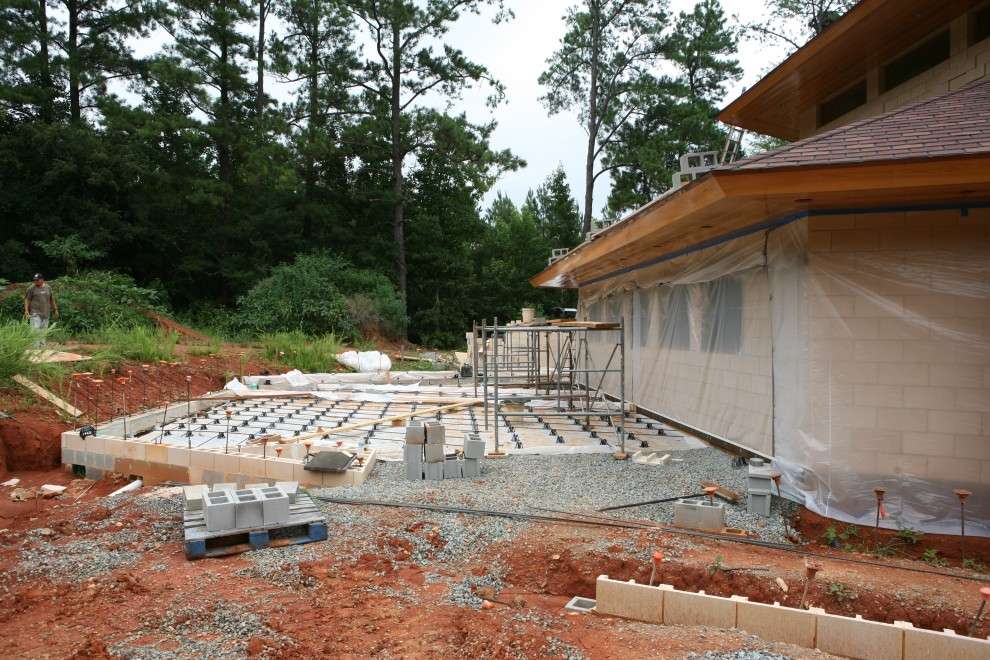 Summertime is a challenge for concrete work, especially when it involves color.  Every day the skies force one to guess whether there will be thunderstorms or not in the late afternoon.  Once the color has set into the concrete, a few splashes of water won’t leave a visible stain, but until the color has hardened, we really need to protect our surfaces: 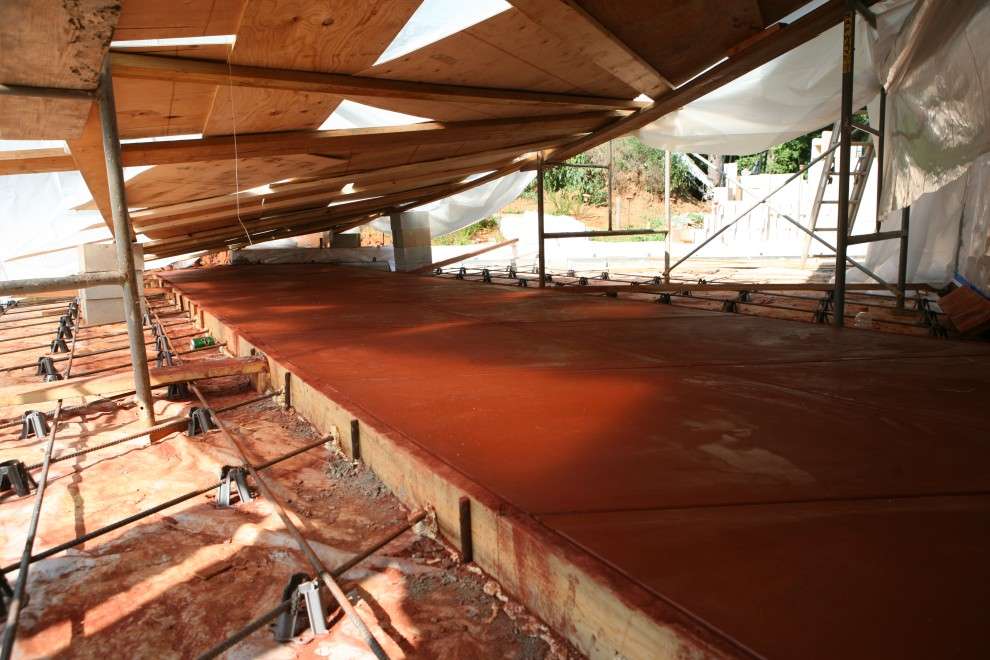 After that form was hard and dry, the crew could “pull up stakes” and put down the next form.  That form was then poured (note the protection of the first form): 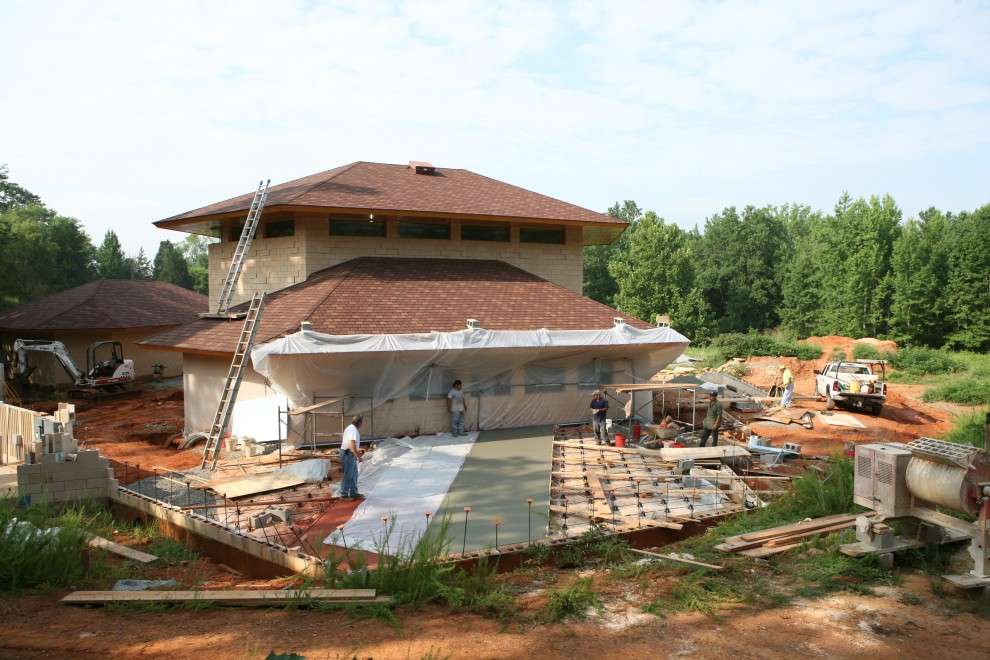 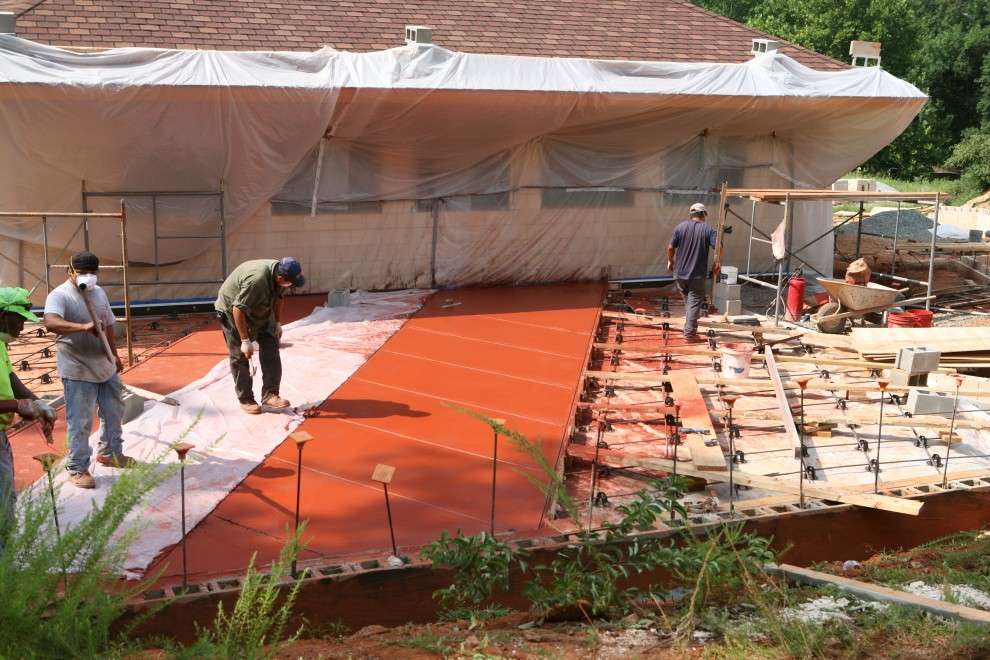 If the weather cooperates, we might finish in a week or two.  If not, it will take longer…

Speaking of the weather, we made good progress putting in the pipes that will carry rainwater from our various drains into catch-basins and daylight.  Here’s one of the first trenches for this: 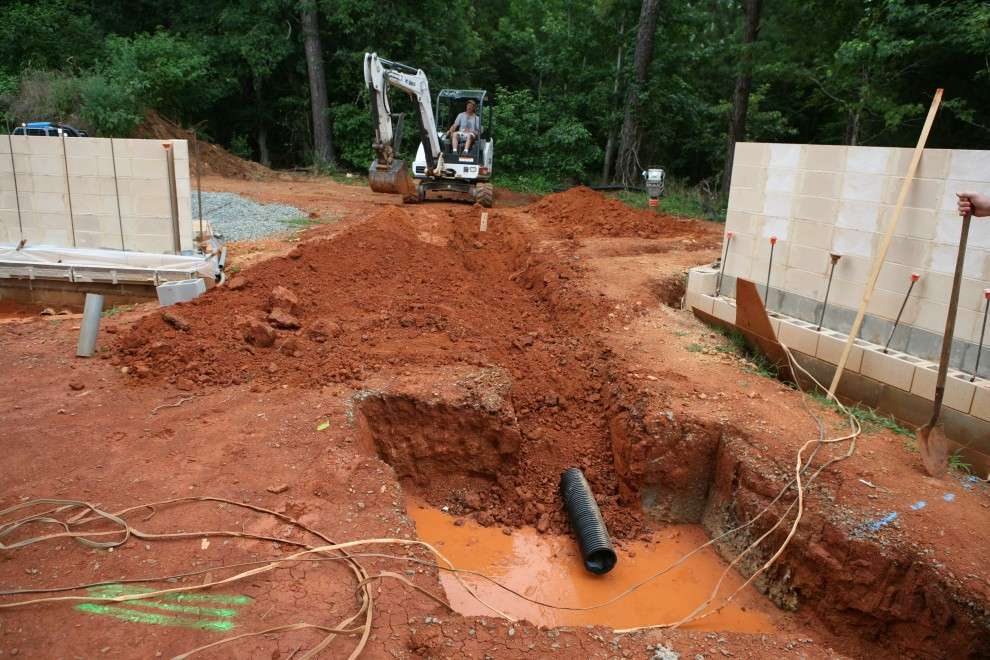 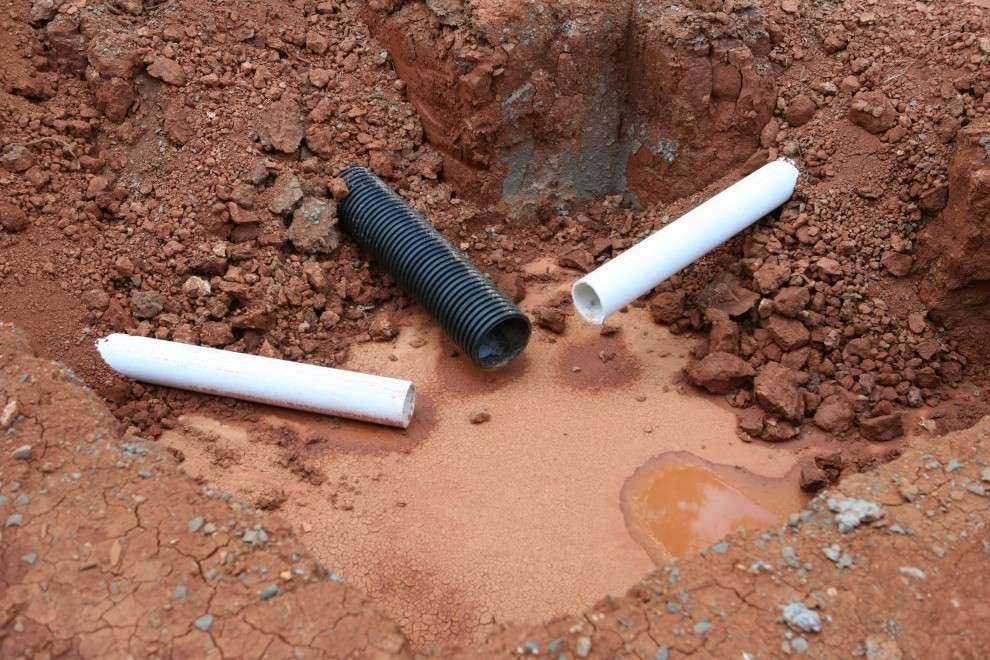 And then these feed our big 8″ pipe: 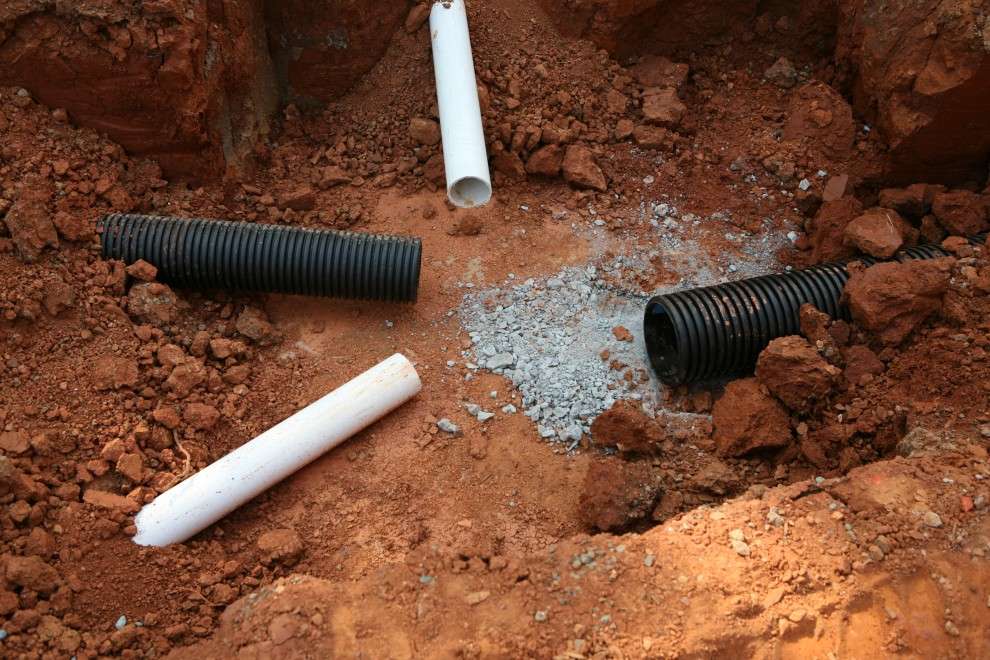 Nobody can promise that we’ll never have a drainage problem, but we’re doing what we can to defend ourselves!

Here are the machines that make this job “all in a day’s work”: 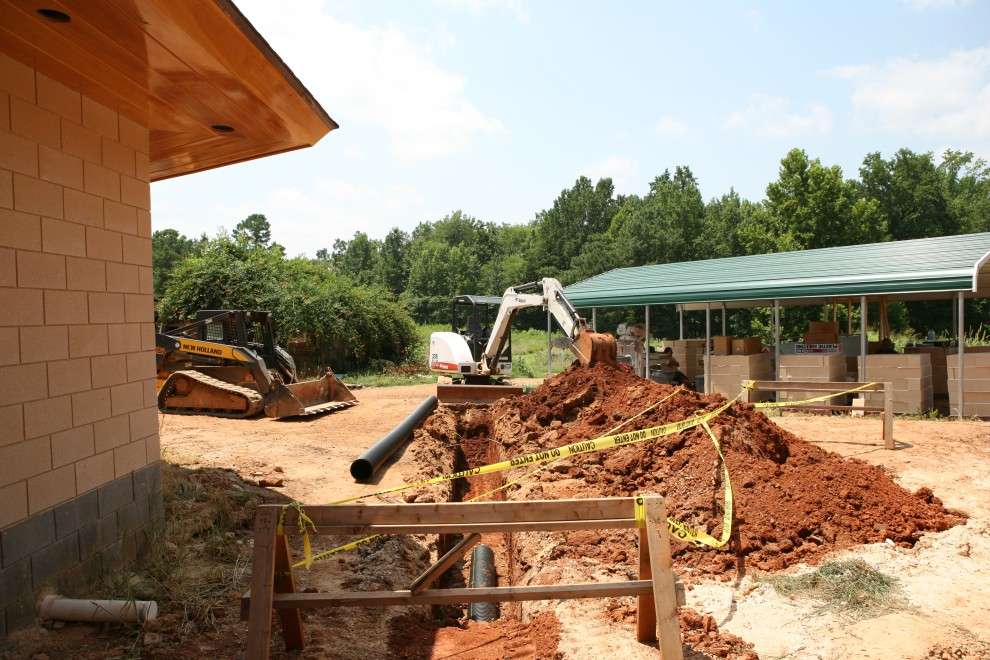 Now, as we make our way inside, let’s just take note of one other new feature: the operational air conditioning units: 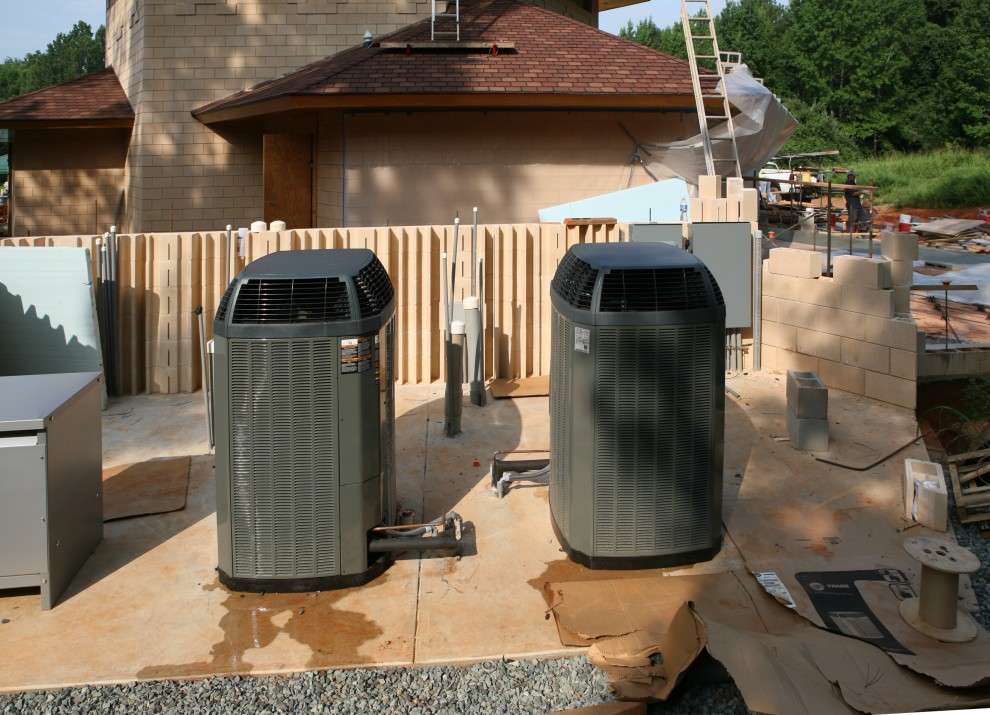 Working in tandem, these two 2.5 ton units can pulled the temperature down to 77° F inside when the outside temperature was 97° F outside.

The framing of the booths was largely finished this week.  At the start of the week we had our sheetrock-and-green glue sandwich in place for the soffit returns: 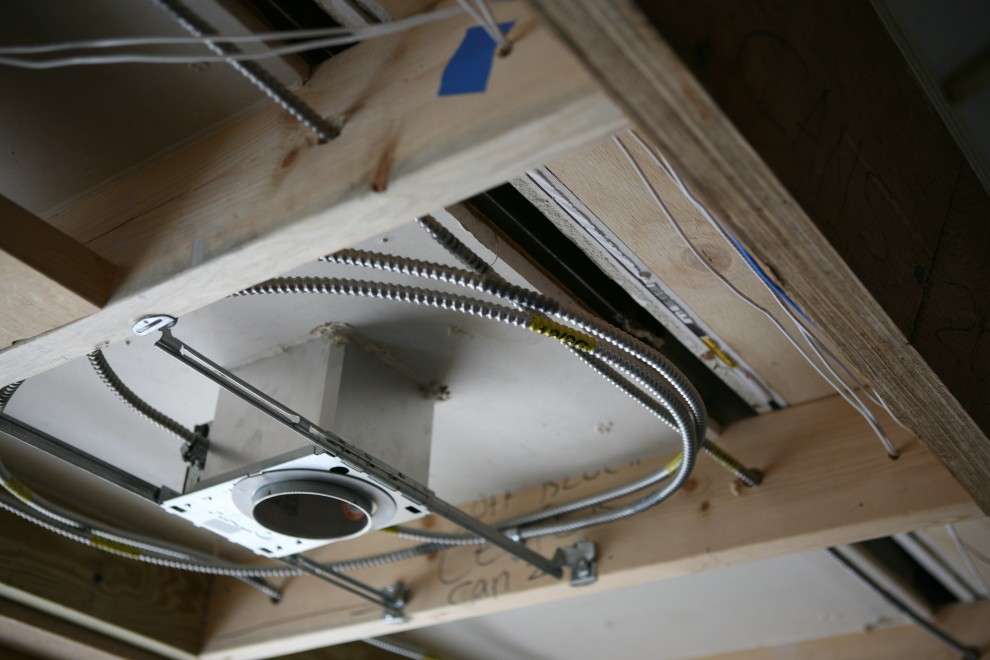 From this underside perspective you can see the gap that exists between the sheetrock and MDF that underlies the ductwork and the sandwich that faces into the room.  This gap was then covered up and caulked with a final sheetrock insert: 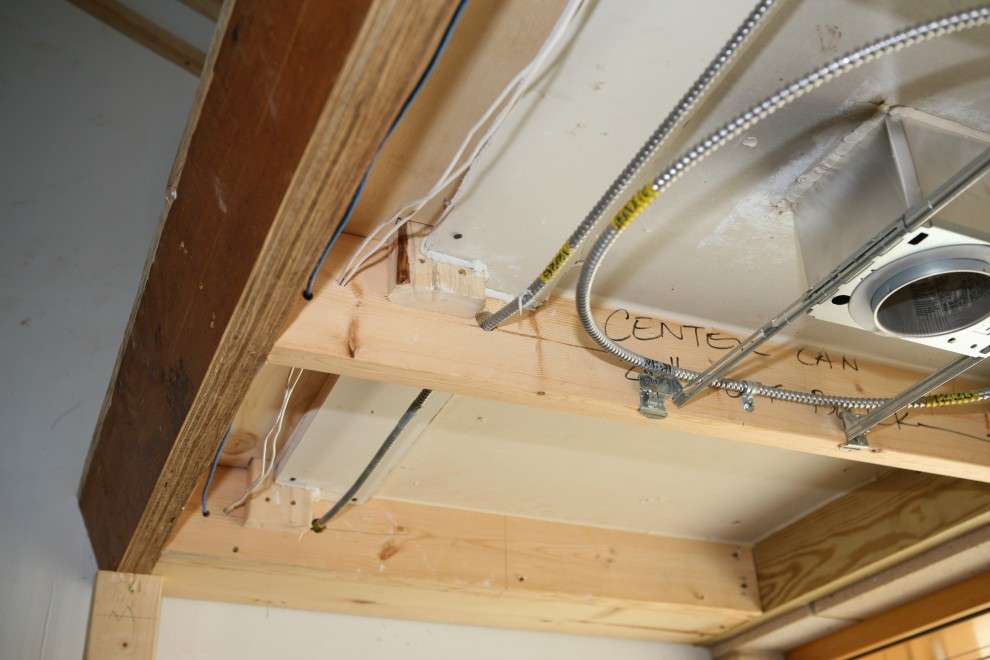 The ceilings of Booth A and Booth B were also prepared for the final trim-out, with strips of “one-by” nailed up and ready to receive the final layers of fiberglass and TopAkoustic; Booth A: 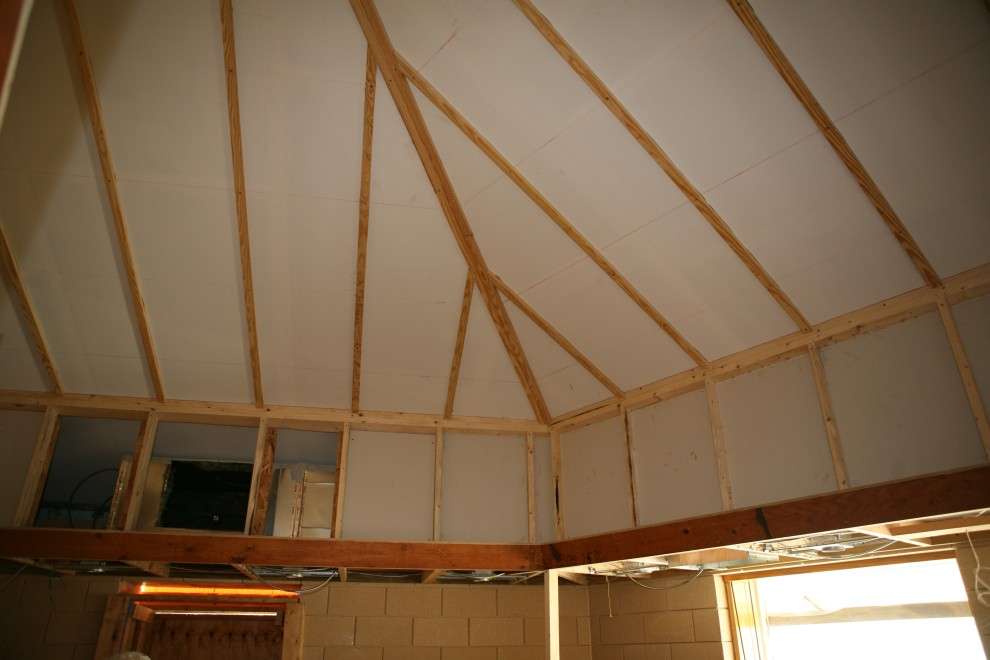 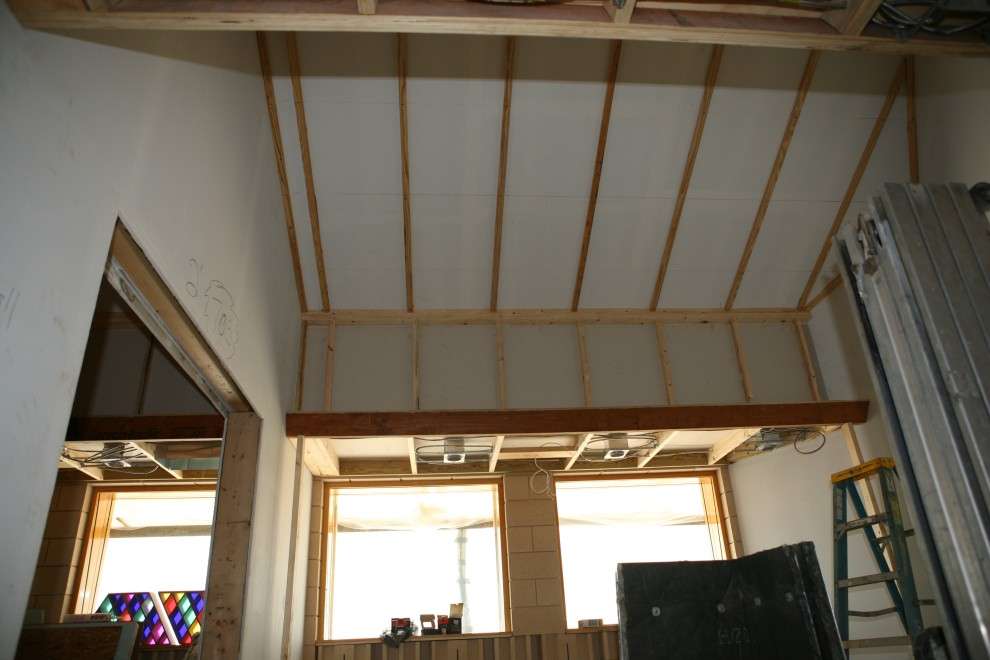 On the technical wiring front, we stripped back the jackets of the 10-component video snakes, revealing a rainbow of colors: 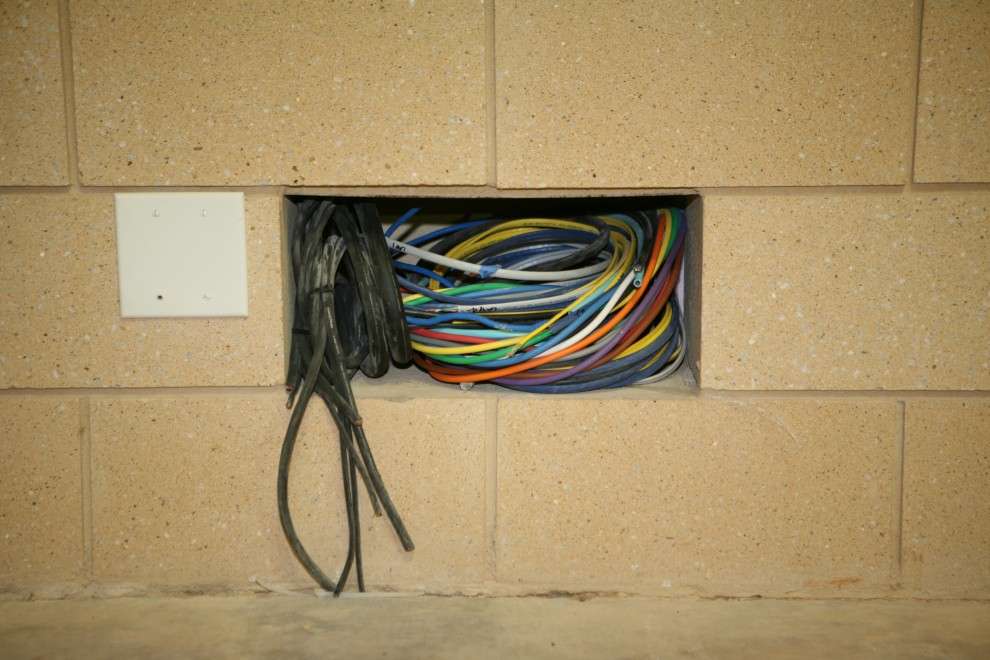 In the mean time, more ductwork is fabricated and delivered: 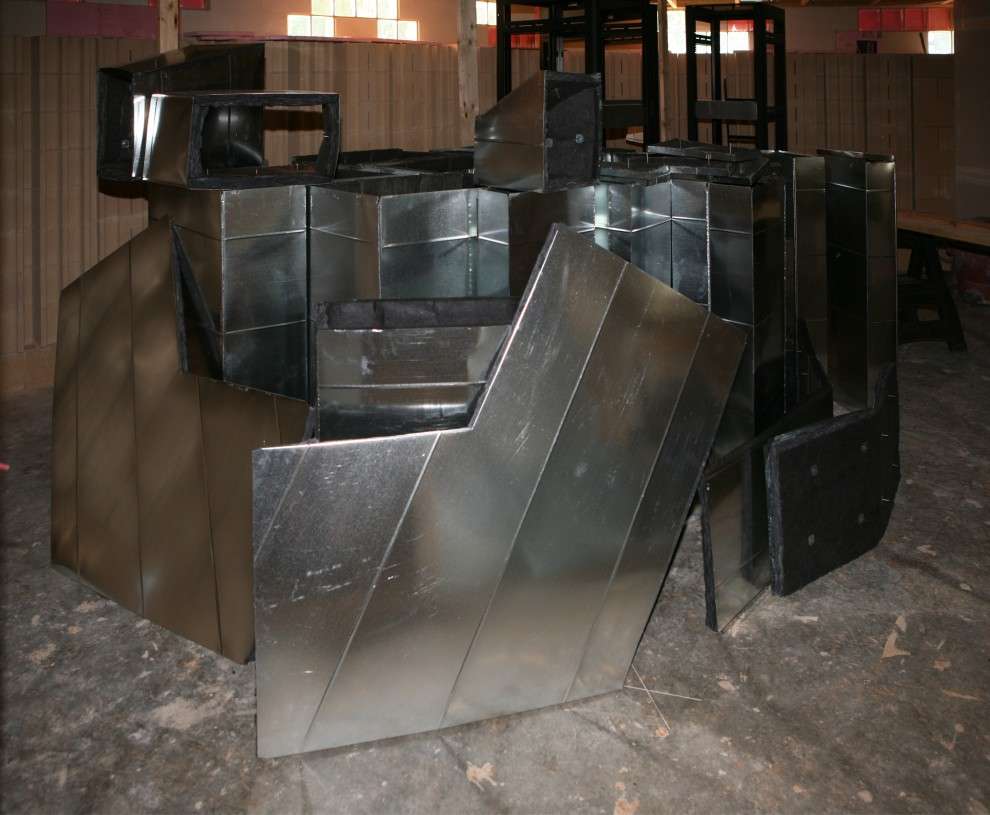 And now it can be said that we are literally chewing away at the final ductwork installation: 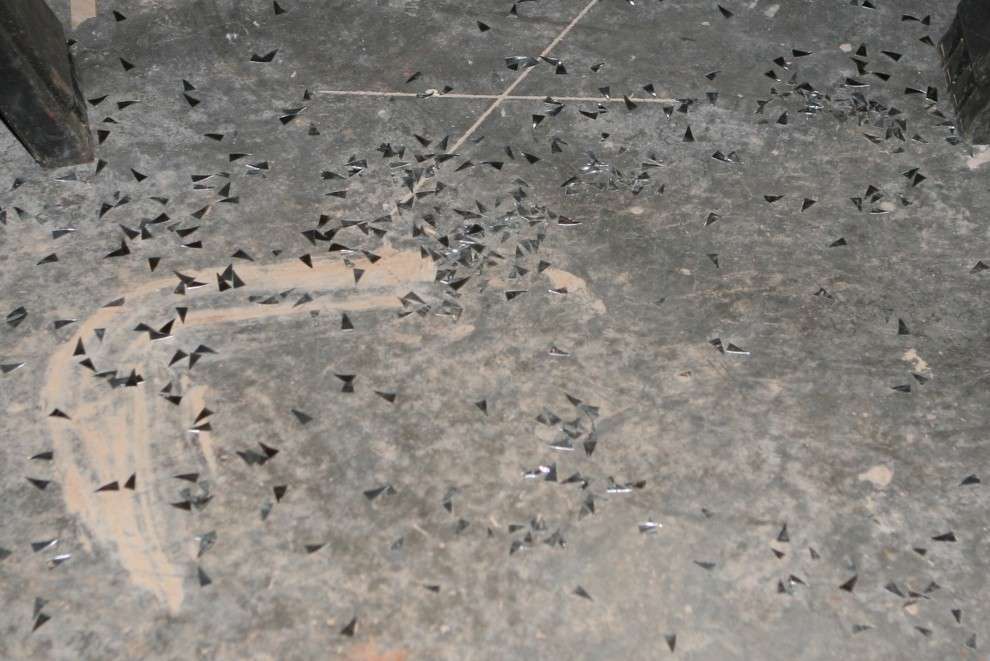 All those little bites are come from here: 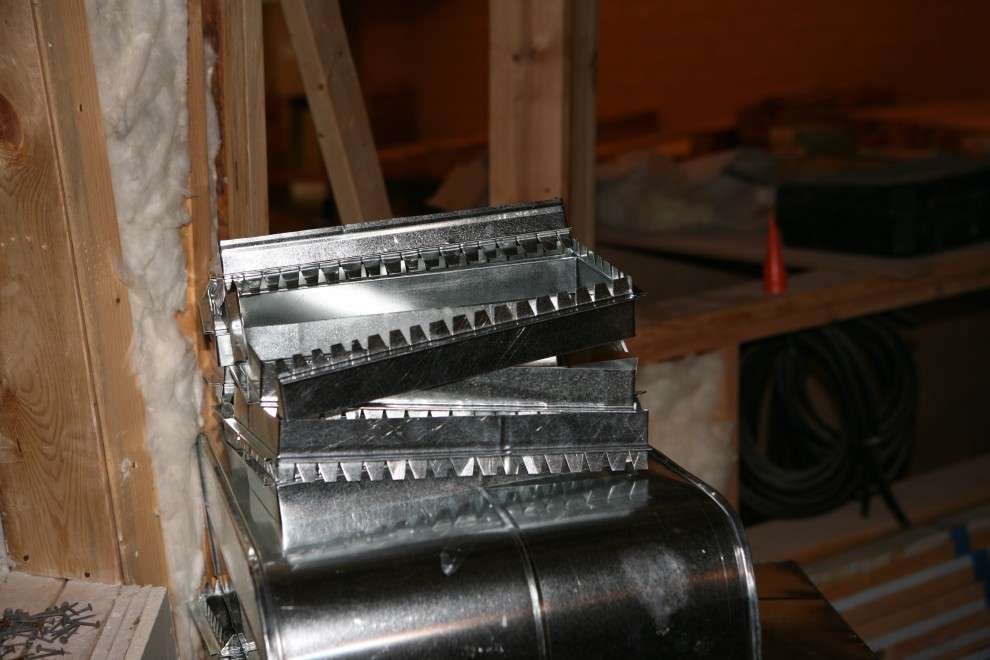 Over in the Annex, there’s been a lot of framing progress.  We started the week with a freshly insulated wall: 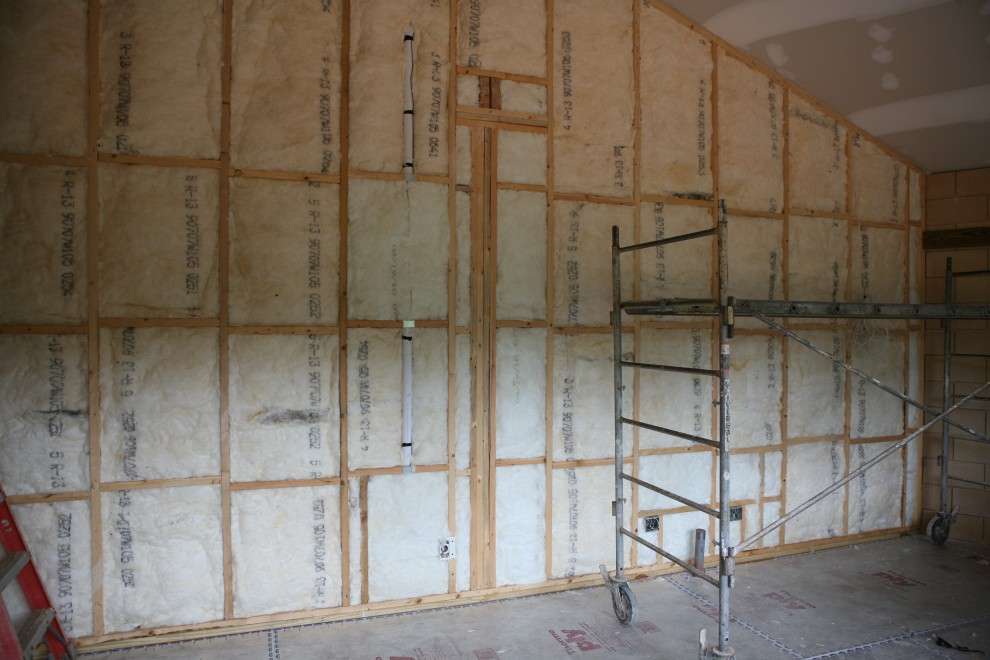 And then the soffit was framed: 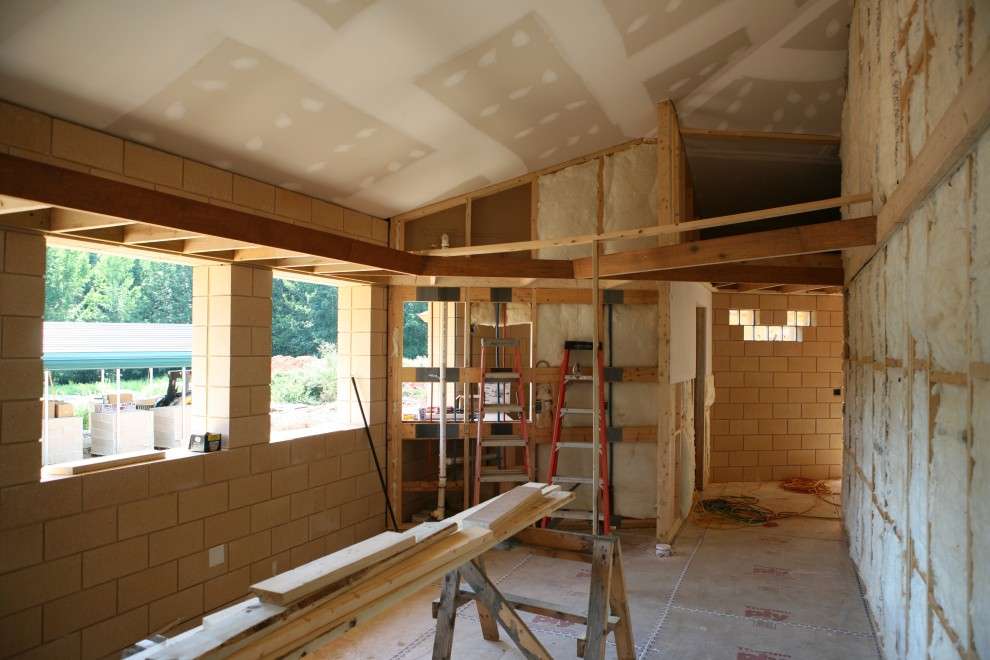 And then the circle was completed: 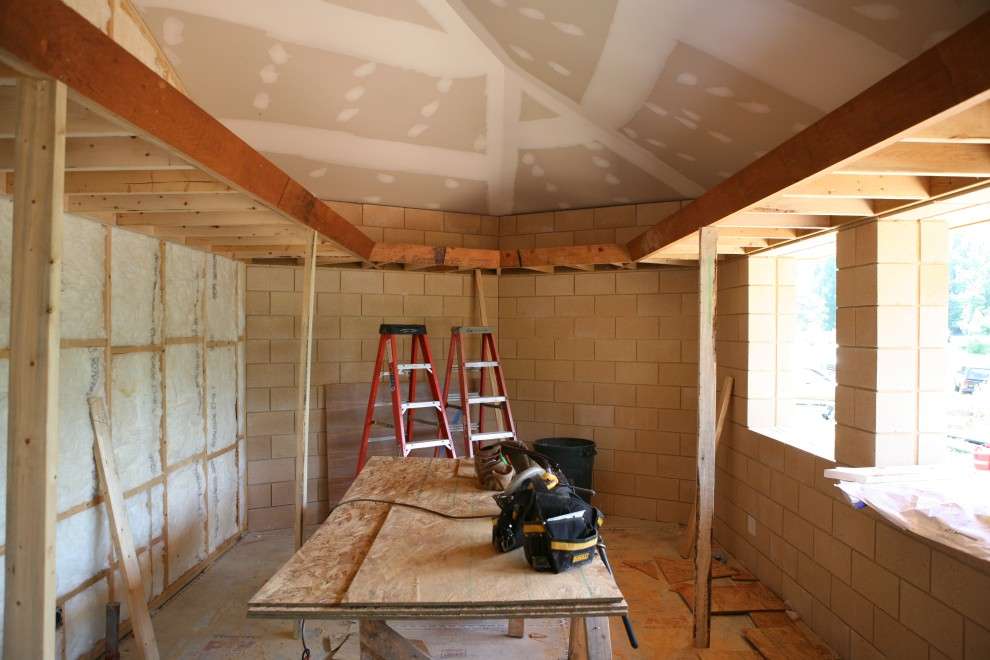