This week I’m choosing to highlight the progress we’re making on the Annex.  Six months ago, the north face of the main studio was transformed as five 500-lb windows were carefully installed into the masonry voids.  This week a much lighter task awaited, as four lithe double-casement windows slipped effortlessly into place:

While the physical installation is now complete, they are not yet trimmed or finished.  When that’s done they will look very much like they match the Cypress of the soffits.

Here’s a view of the operable windows from the inside: 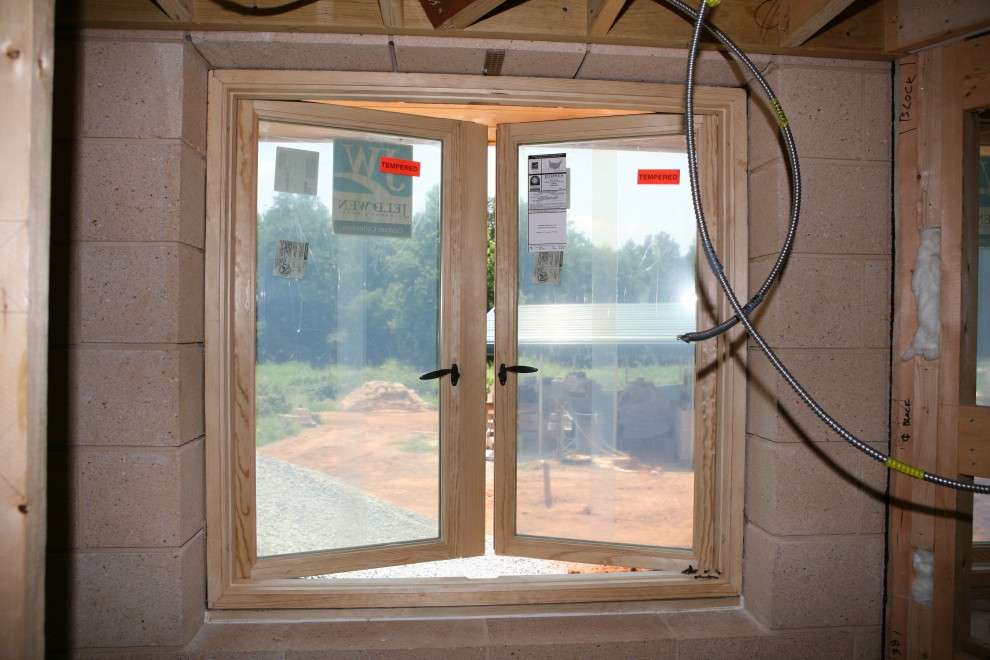 Obviously we haven’t yet taken off the plastic protecting the glass.

Looking around to the opposite wall we can see that the electricians have drilled all their holes into the soffits to bring power to our lamps: 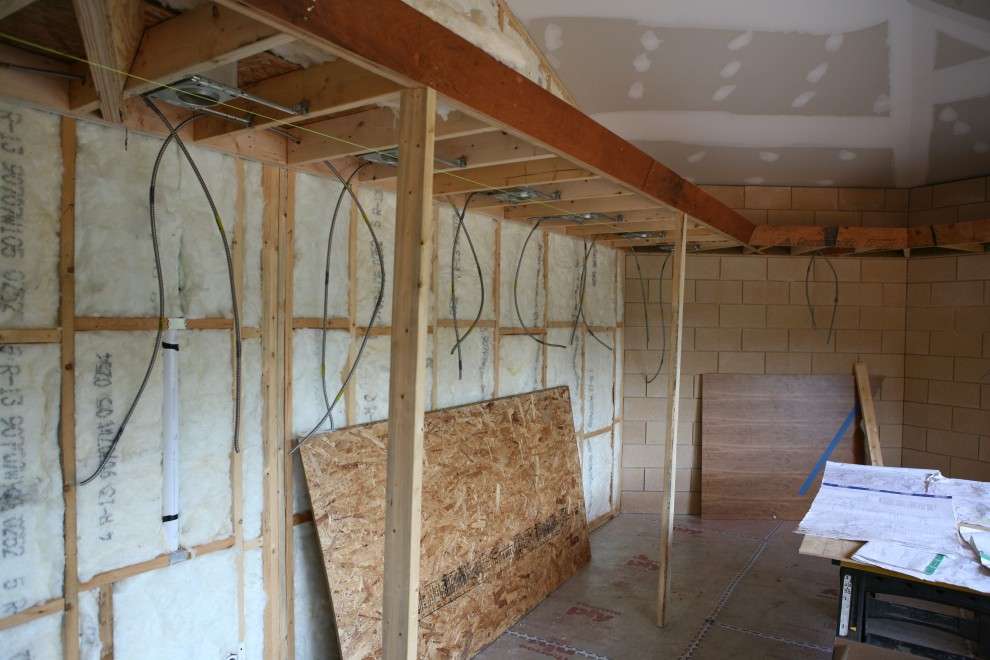 And the plumbing in the Lounge Kitchen is also coming along: 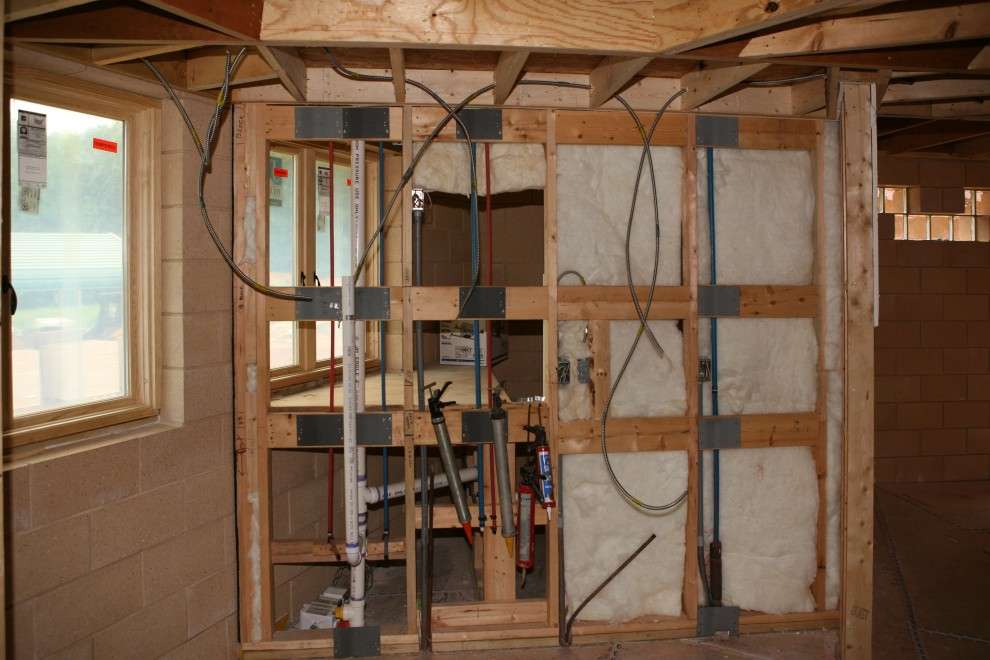 The soffit in the Annex Control Room is also starting to take shape: 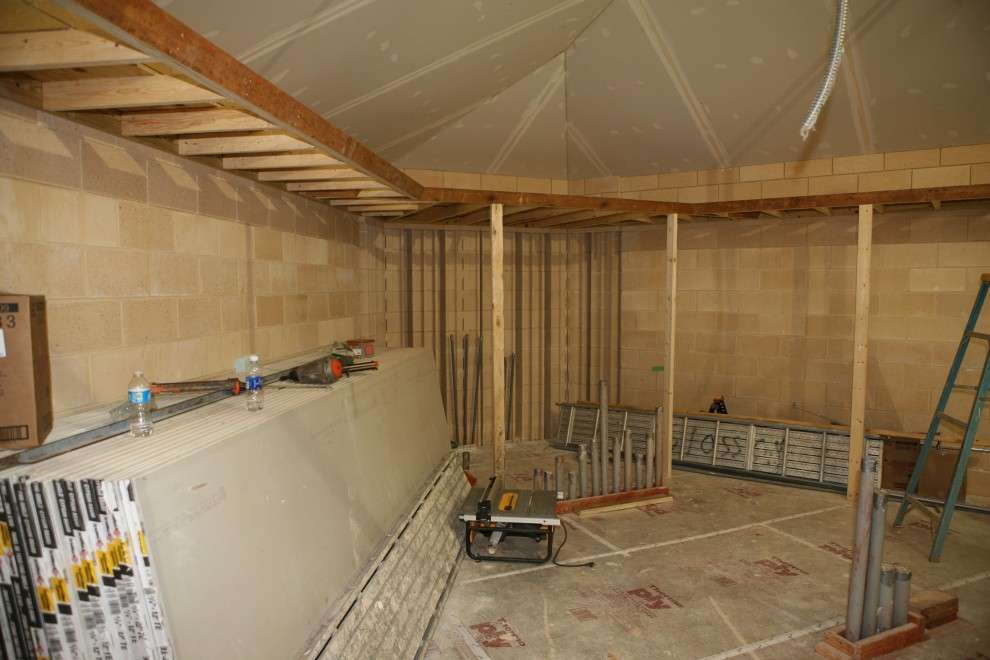 Here’s a slightly different perspective showing how deep the front wall bass trap will be: 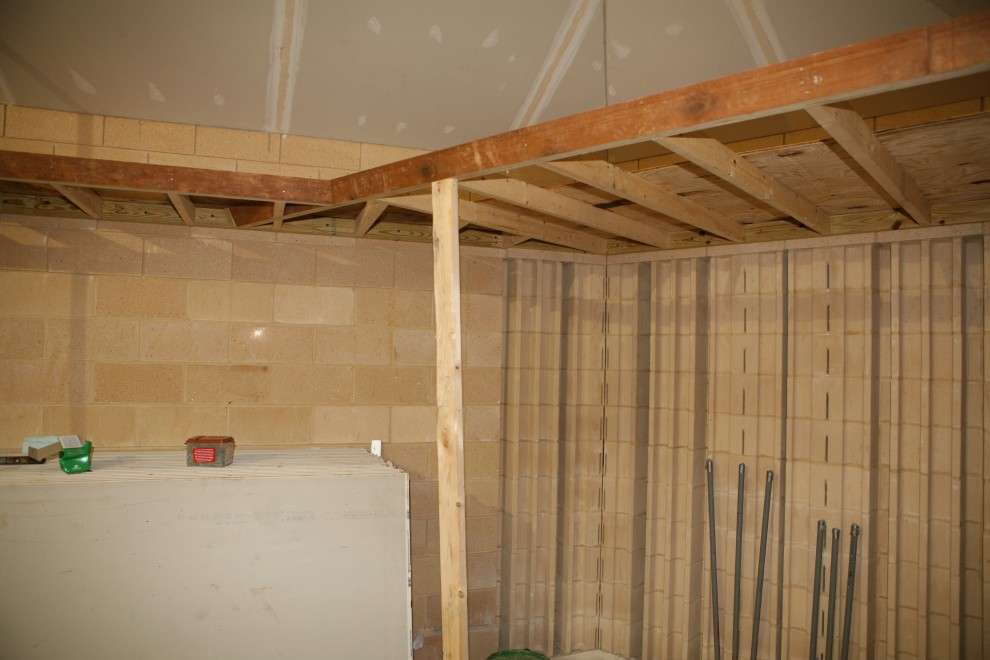 In the Main Control Room, framing has restarted, with the placement of several top plates for the soffit framing: 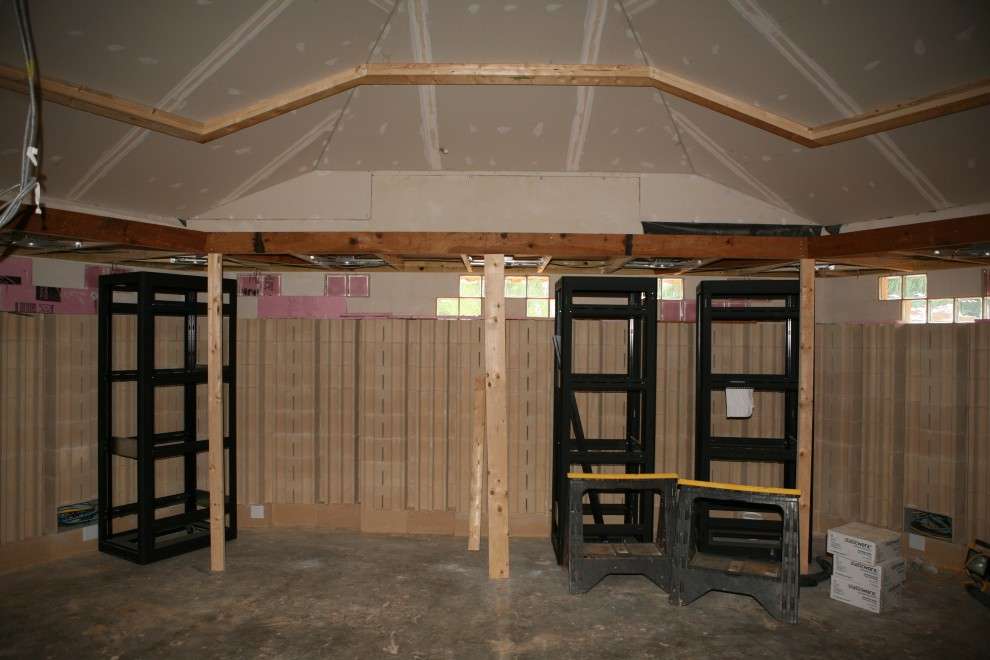 Seeing the above photo brings to mind an analogy for the difference between building a typical square framed building and this multi-faceted design.  In the simple square case, getting two framing members to join in a corner is a bit like making a simple shot in Pool.  If your cue ball is not too far off the mark, the ball you next strike is going to go where you want it to go.  In this case, the extra transitions are like making combination shots, and each time you turn one of these strange corners, the errors don’t average, but multiply.  Fortunately, with laser-guided precision, the marks and the cuts can be amazingly precise.  It would be unsportsman-like to use a laser-guided cue stick to play a game of pool, but we’re not playing for sport so we’ll take all the advantages we can get!

Here’s another perspective that really shows just how much one really has to know where one plate ends and the next plate starts: 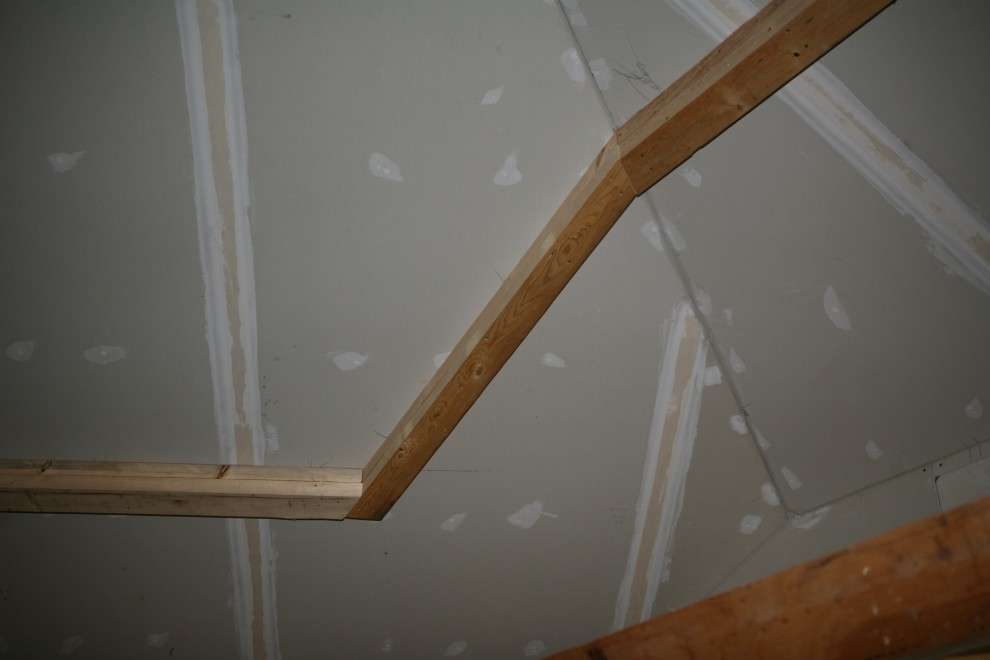 Totally different than just making sure that two beams come together at one point!

Stepping out into the Loggia, we can see that duct work is proceeding apace.  Registers have been cut into the ceiling material: 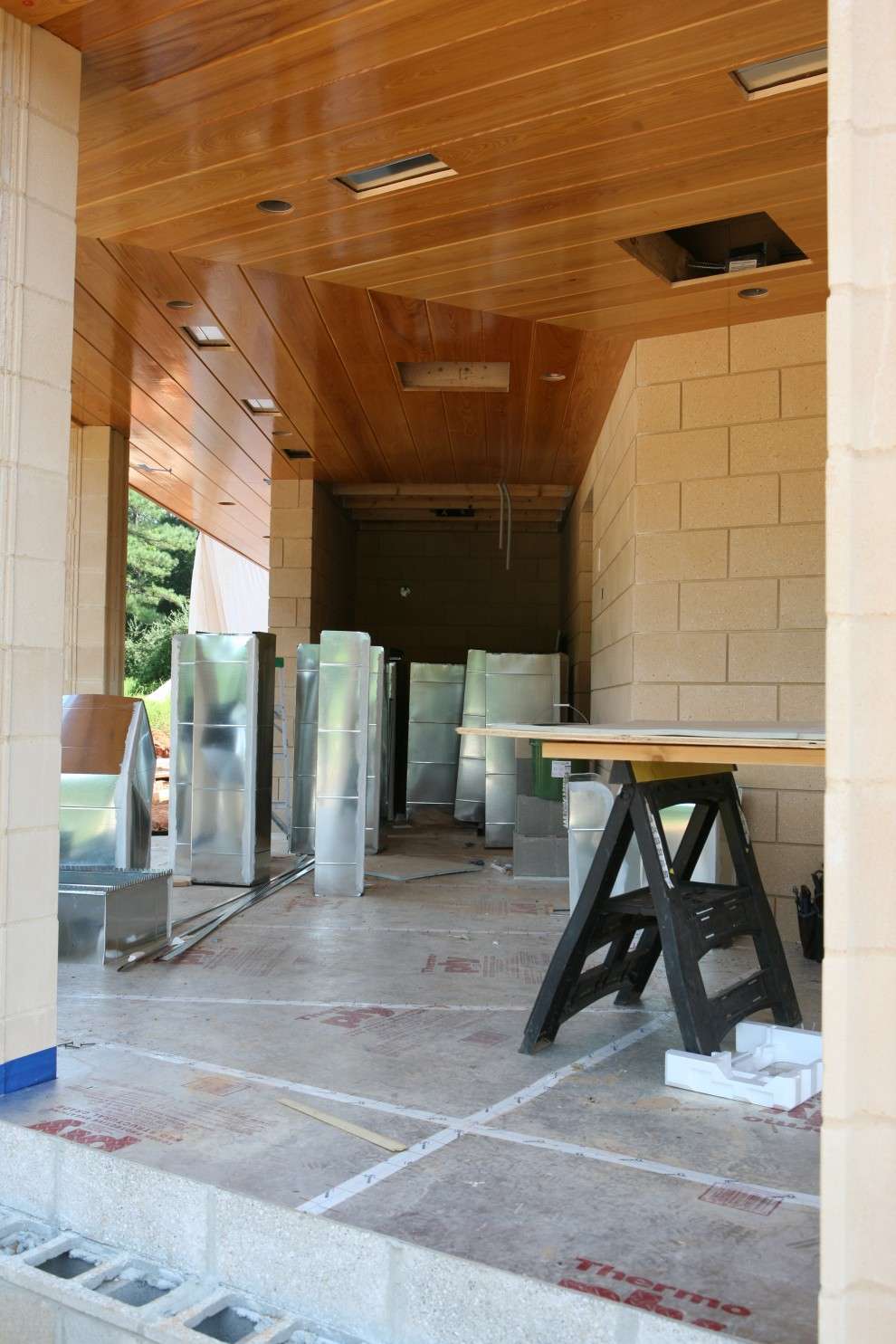 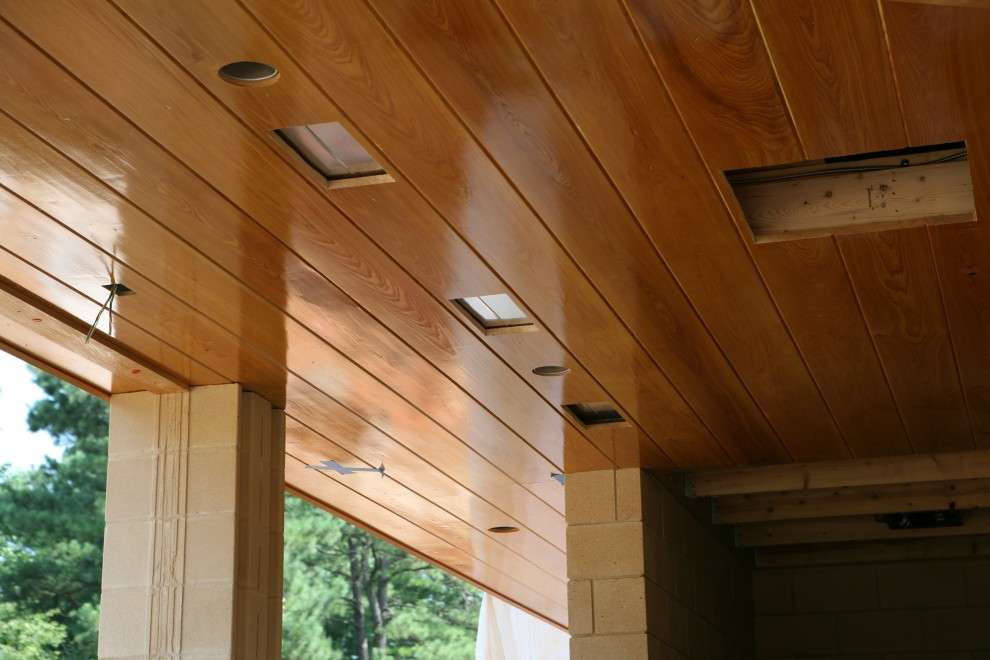 Further outside, there’s been a considerable amount of trenching and drainage work done.  From the beginnings of the catch basin last week, more pipes are added: 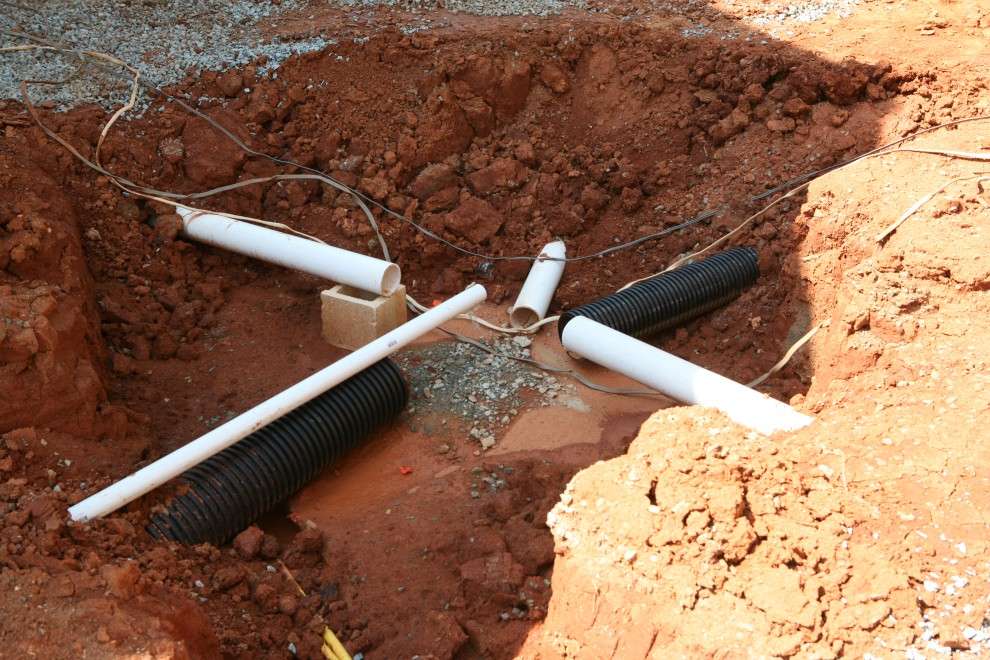 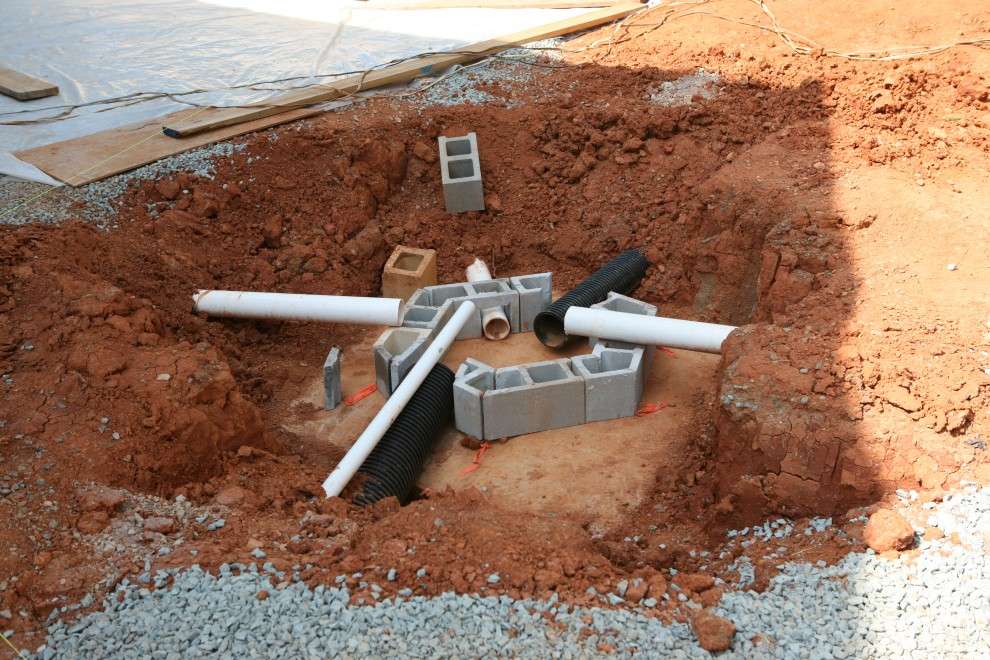 And more trenches are filled with more pipe: 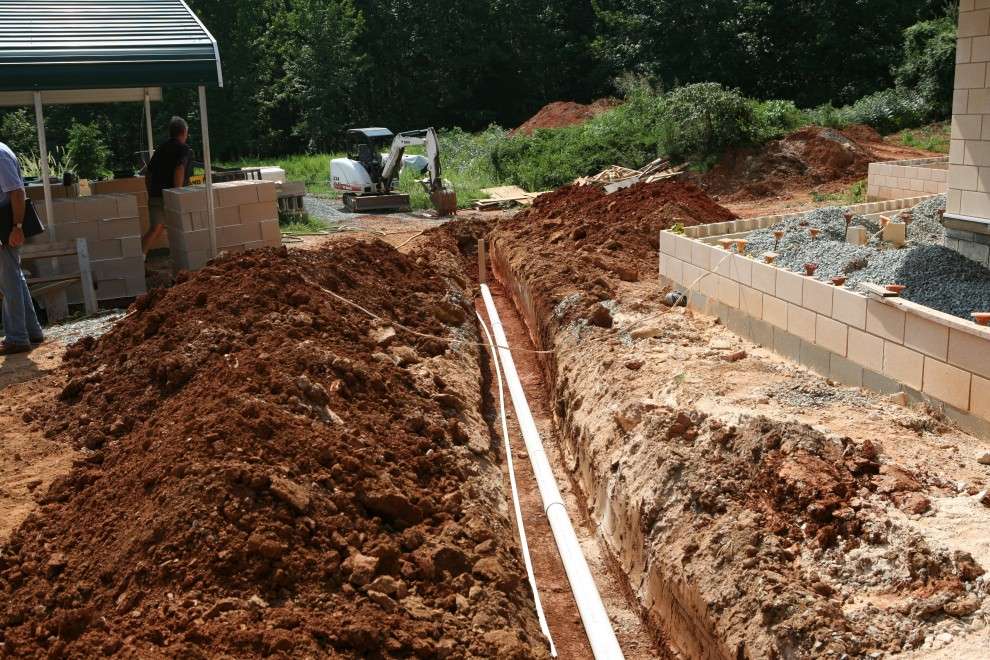 But in the end, it all gets put back together: 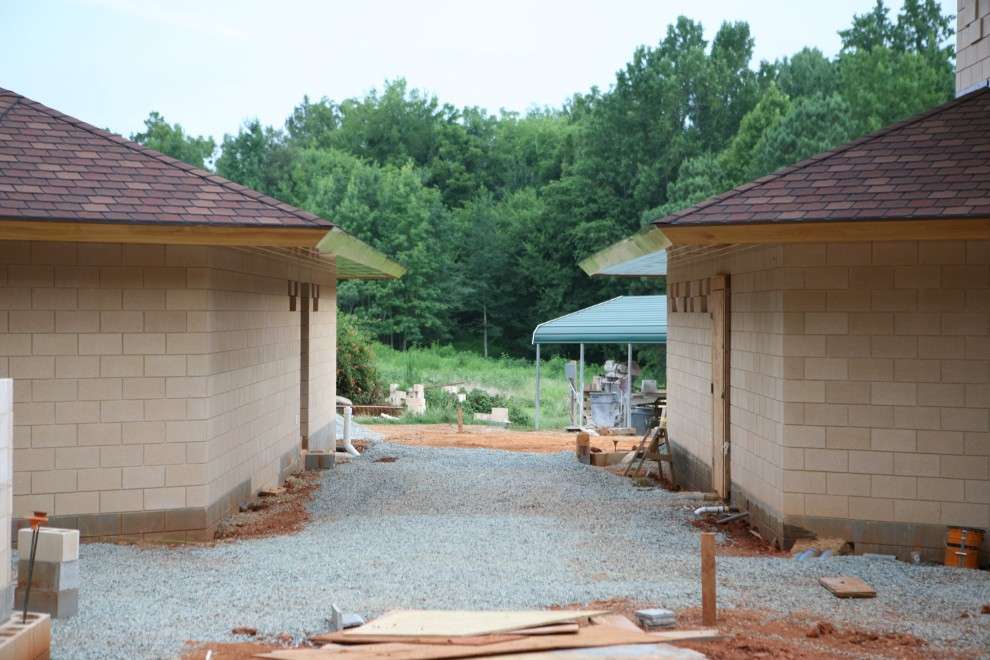 As you can see: 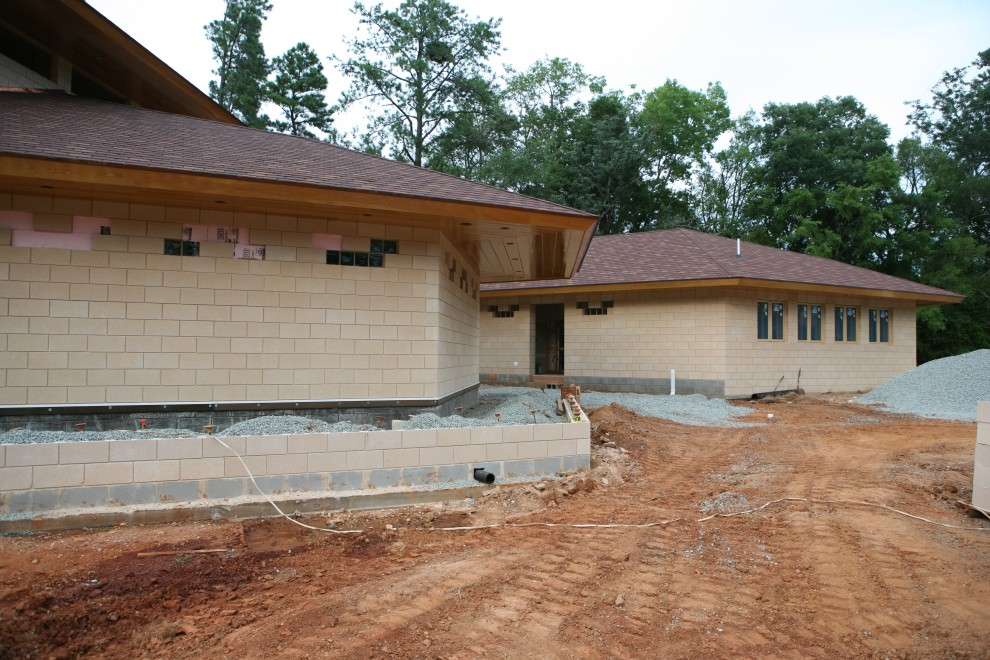 Lest anyone doubt that “one man’s trash is another man’s treasure”, consider the rubble pile that’s been growing since the first concrete blocks were cut in late 2007: 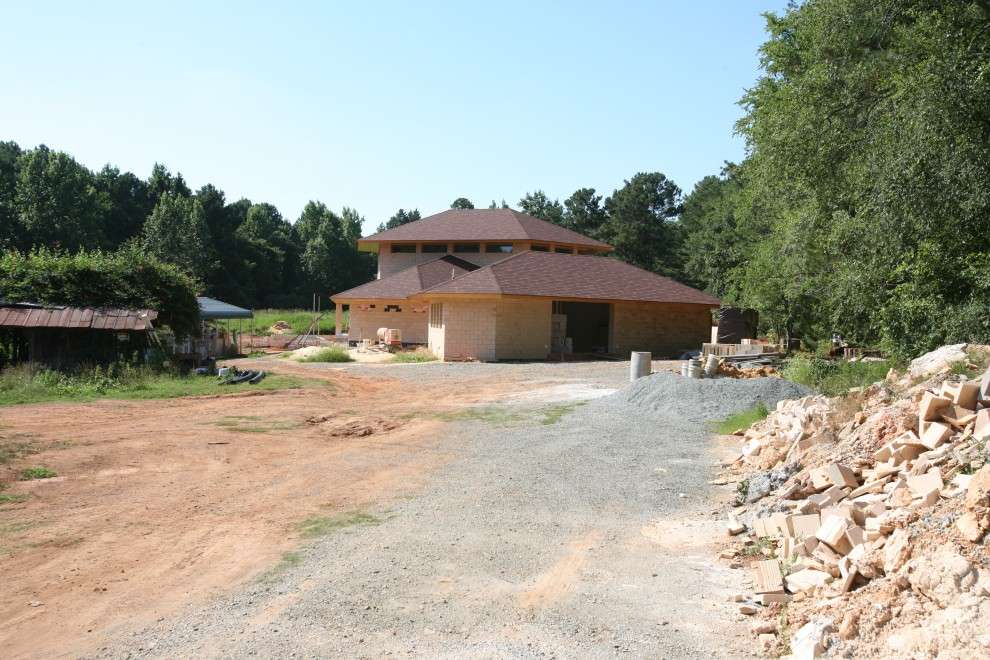 It’s actually difficult to really comprehend just how large that pile is, and not only because it’s clipped in the photo.  So here’s some help: this machine loaded that pile onto dump trucks: 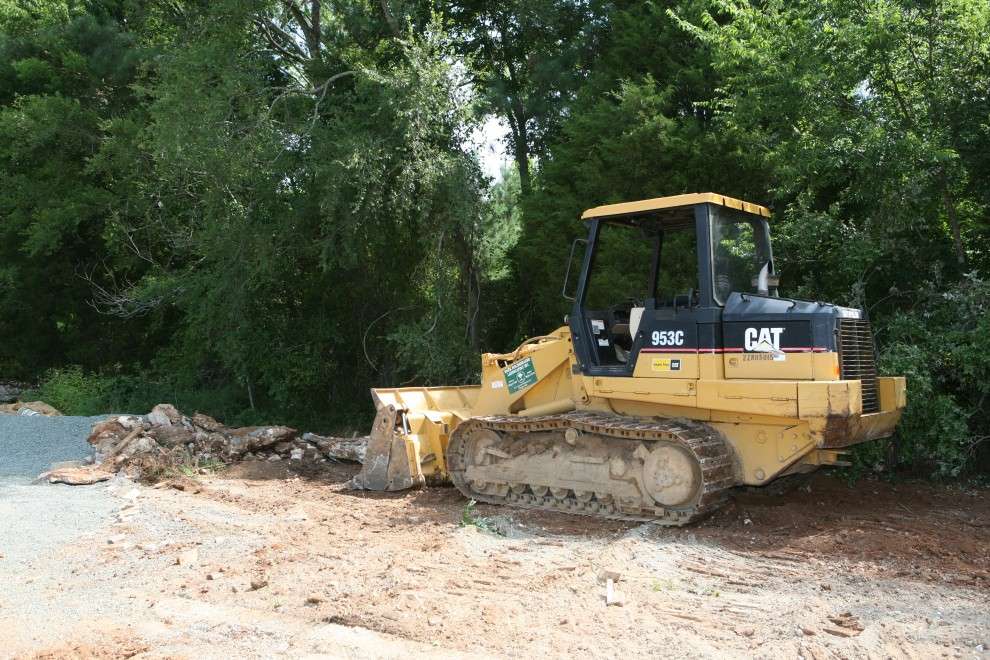 which then took it to be used as clean fill by the the New Hope Valley Railroad.  When all was said and done, it filled seven full-sized dump trucks.  That’s a lot of space we did waste in the local landfill!

Finally, a fresh perspective on the studio now that the rubble pile has been removed: 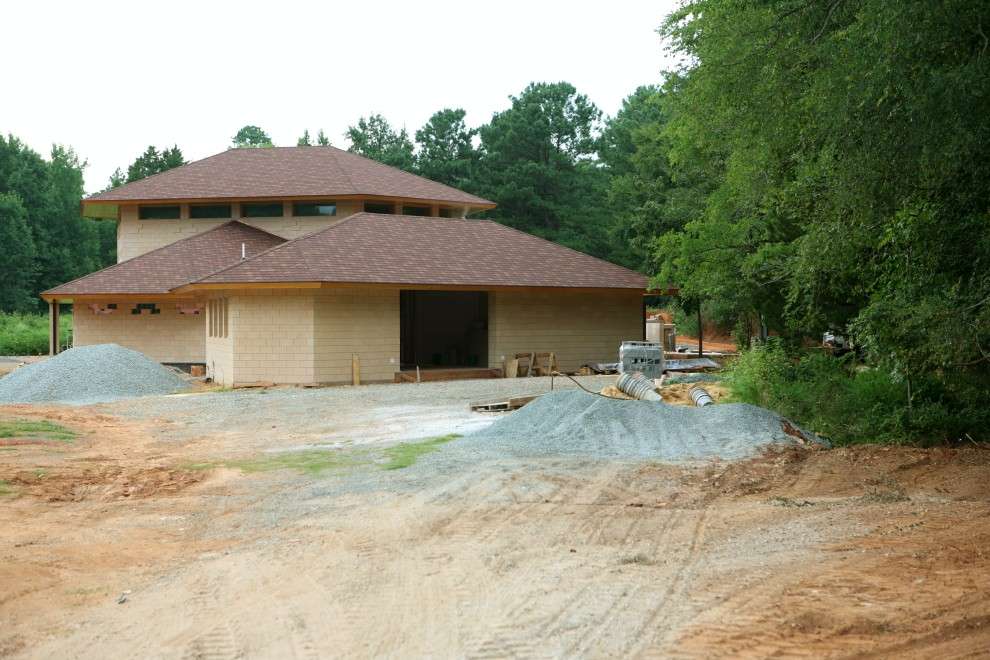