Two weeks ago, world-renowned and Grammy®-winning violinist Gil Shaham performed Tchaikovsky’s Violin Concerto in D with the UNC Symphony Orchestra. The electrifying performance was a capstone event for the first half of his 2015-2016 artist-in-residence program at UNC Chapel Hill.  The smiles on the faces of those students after the performance confirmed that they knew that they had not merely witnessed greatness, but had participating in creating that greatness.  And with that great success now a part of their foundation, they can aim even higher in whatever they do next, whether it be more performances, academics, professional career ambitions, or public service.  As a Carolina Performing Arts board member, I am proud generally of the artistic residencies we have helped to realize at Chapel Hill, and very proud of this one in particular.

Last week, I had a chance to witness and help support another artist-in-residence program in Chapel Hill.  Banda Magda (founded by Greek-born singer, film scorer, and composer Magda Giannikou) has played Carnegie Hall, Webster Hall, Irving Plaza, The Kennedy Center, The Jefferson Center, Celebrate Brooklyn, Jazz al Parque, St. Moritz Festival Da Jazz, and the Chicago World Music Festival.  Their debut album Amour, t’es là? set a blistering pace (Top 10 Billboard World Music Charts, NPR’s All Songs Considered, First Listen, NPR’s 10 favorite World Music Albums 2013), and their second album Yerakina shows the next step in their musical evolution.  Magda and her band-mates have composed and/or performed on a number of Grammy®-winning and Grammy®-nominated projects, yet instead of chasing only brighter and brighter lights, she takes the time to bring up the next generation of artists and creators by doing artist residences with youth orchestras.  This year the stars aligned for the youth orchestra of the Guy B. Phillips Middle School in Chapel Hill, North Carolina.

Just as Gim Shaham challenged the UNC Symphony Orchestra to raise their game, Banda Magda did the same for the 8th graders playing in the youth orchestra.  There is, of course, a minimum level of technical proficiency required to make the sounds of the orchestra recognizable as the melodies and harmonies of a given piece of music; and orchestra leader and conductor Ann Daaleman prepared the students well on that account.  But the real magic of the residency became apparent as the orchestra began to feel the music through the shifting beats and grooves played by the band’s percussion section.  Playing a song in 7 is quite a challenge when one has never counted music beyond 4, or perhaps 6. 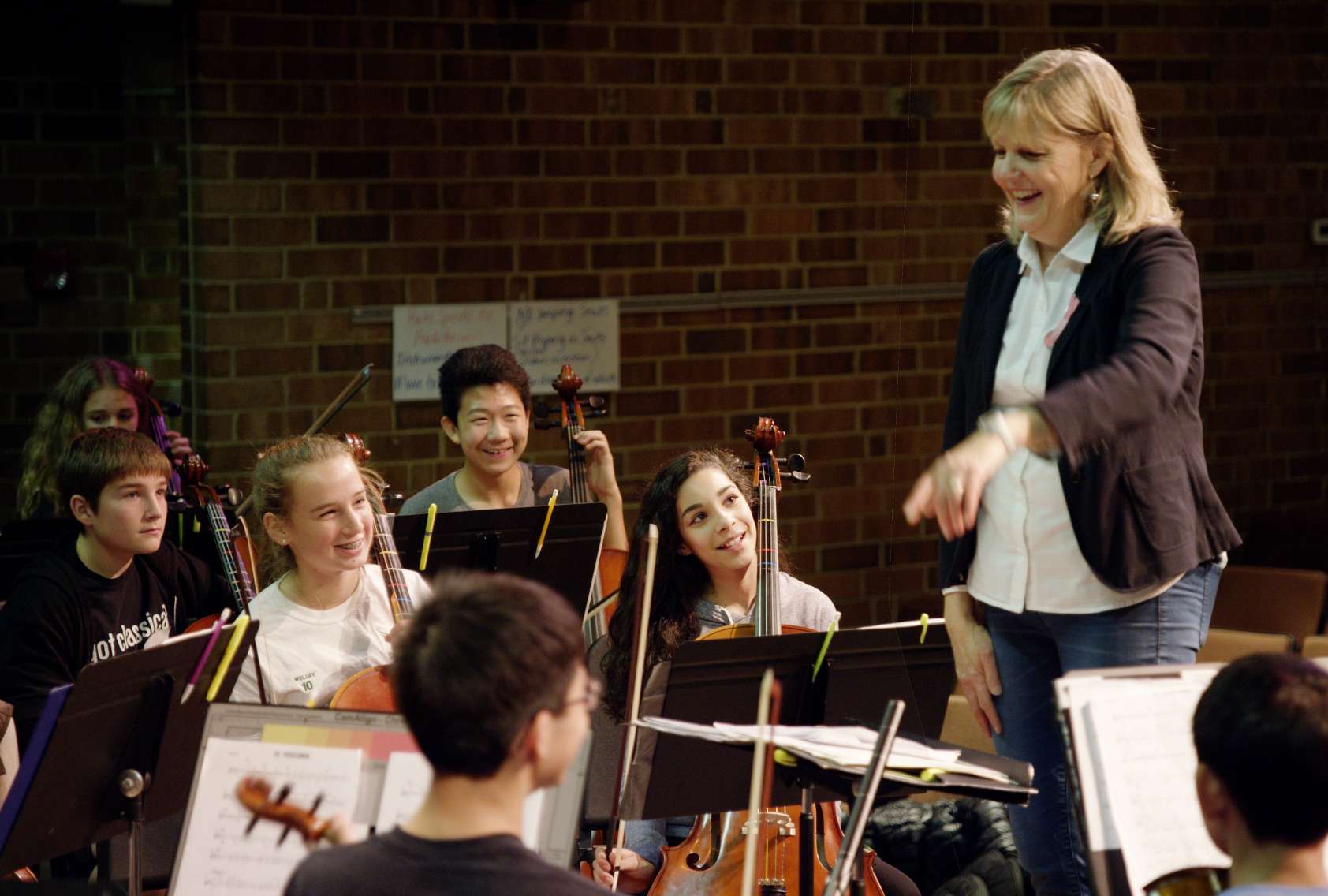 As the students began to let go of the written notes and started to feel the music, Magda then threw everybody a wonderful curveball when she asked the orchestra to improvise.  This required the students to use not only their ears, but also their hearts.  In sections written as rests for the orchestra, she invited them to find harmonic overtones of the song’s chords and to articulate those as the band took the lead.  Then, she took it a step further, inviting the violins to speak like a community of birds–with each instrument representing an individual bird call.  The children had to imagine a bird, and how that bird would call out to others.  They had to balance the singing and the listening, just as birds must do in the wild.  By the time the first of three day workshop was finished, the children moved not only beyond the score, but beyond the boundaries of country and hemisphere, becoming the birdsong of the Amazonian rainforest which they created in their own imaginations.

On Thursday evening, the band and the orchestra gave a performance that truly earned a standing ovation.  And I am sure that it taught the children something they could never learn from a book or studying for a test, which is how to follow a plan while being creative, how to listen and speak at the same time, all the while enjoying the challenge of hard work and practice.  BRAVO!