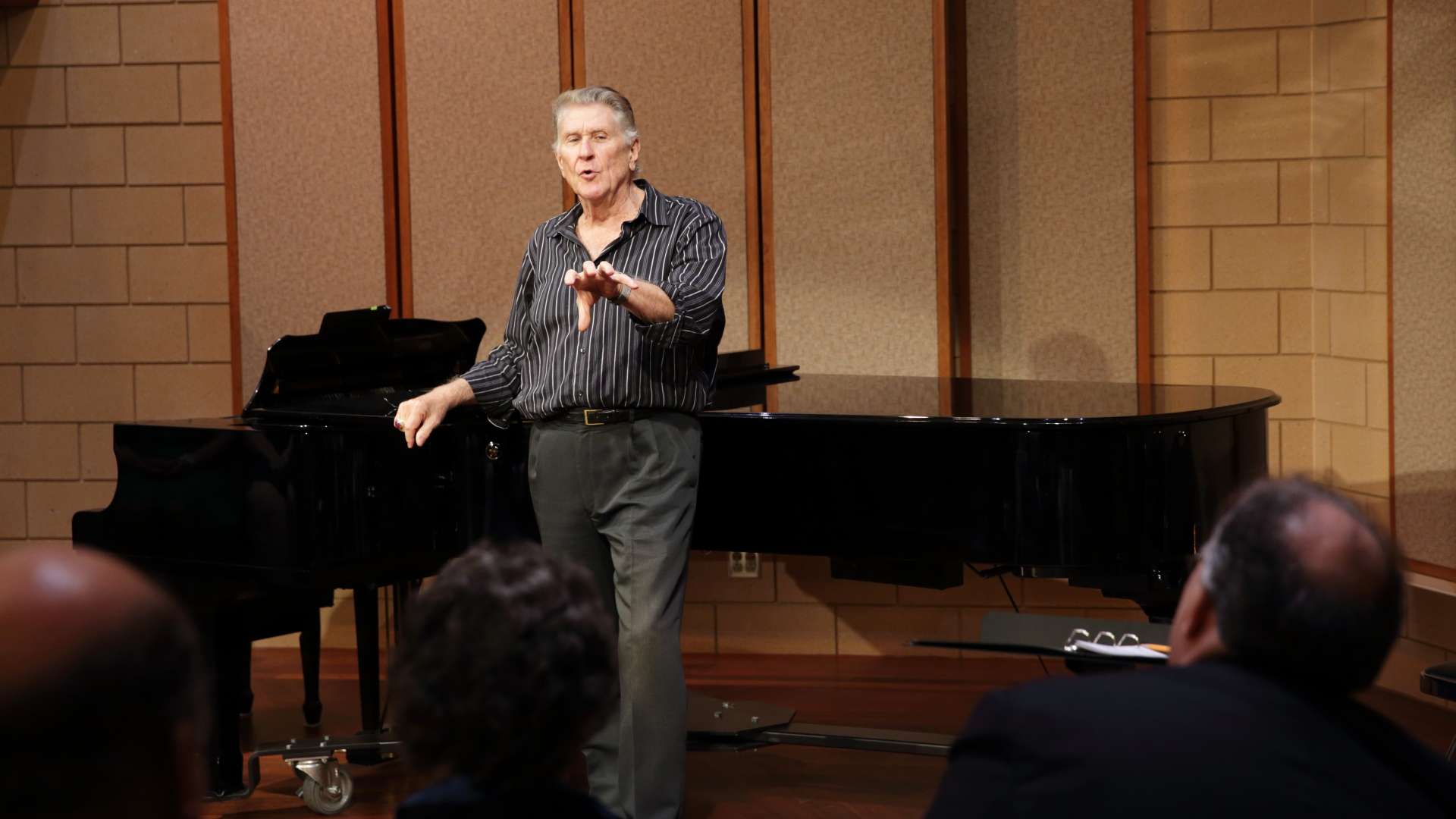 This week the legendary baritone Sherrill Milnes visited the Triangle, sharing his wealth of knowledge and experiences through a series of lectures, dinners, and Master Classes.  Yesterday he gave a Master Class at UNC Chapel Hill for (college-aged) voice students, and today he gave a Master Class at the studio for (graduate-level) fellows of the AJ Fletcher Opera Institute at UNC School of the Arts.  The event drew participants all the way from Winston-Salem to Raleigh, with a goodly number coming from Chapel Hill, Durham, and, of course, Pittsboro. 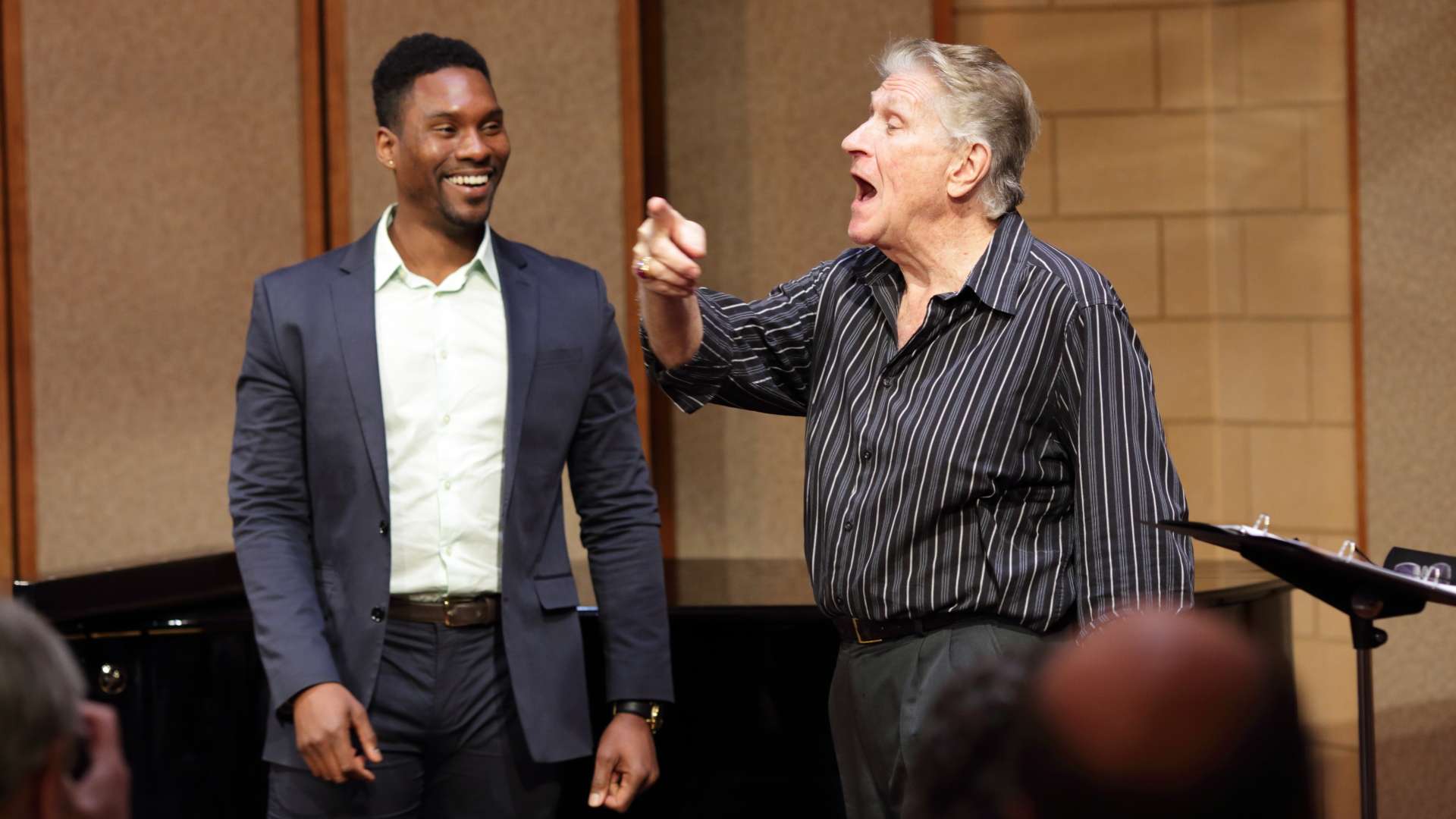 The Fletcher Fellows were a game lot, each preparing a piece to sing for Mr. Milnes, each knowing they were going to get immediate and honest feedback, and then each knowing they’d have a chance to see how much of that feedback they could incorporate into a subsequent rendition.  It’s not easy stuff, in and of itself.  Now, imagine trying to process all that while singing in front of 50+ unfamiliar people.  That’s really not easy!  Nevertheless, every single one of them made it look like fun.  And as Mr. Milnes taught the finer points of opera, whether related to convention or practicality, aesthetic or necessity, we all learned something in the process. 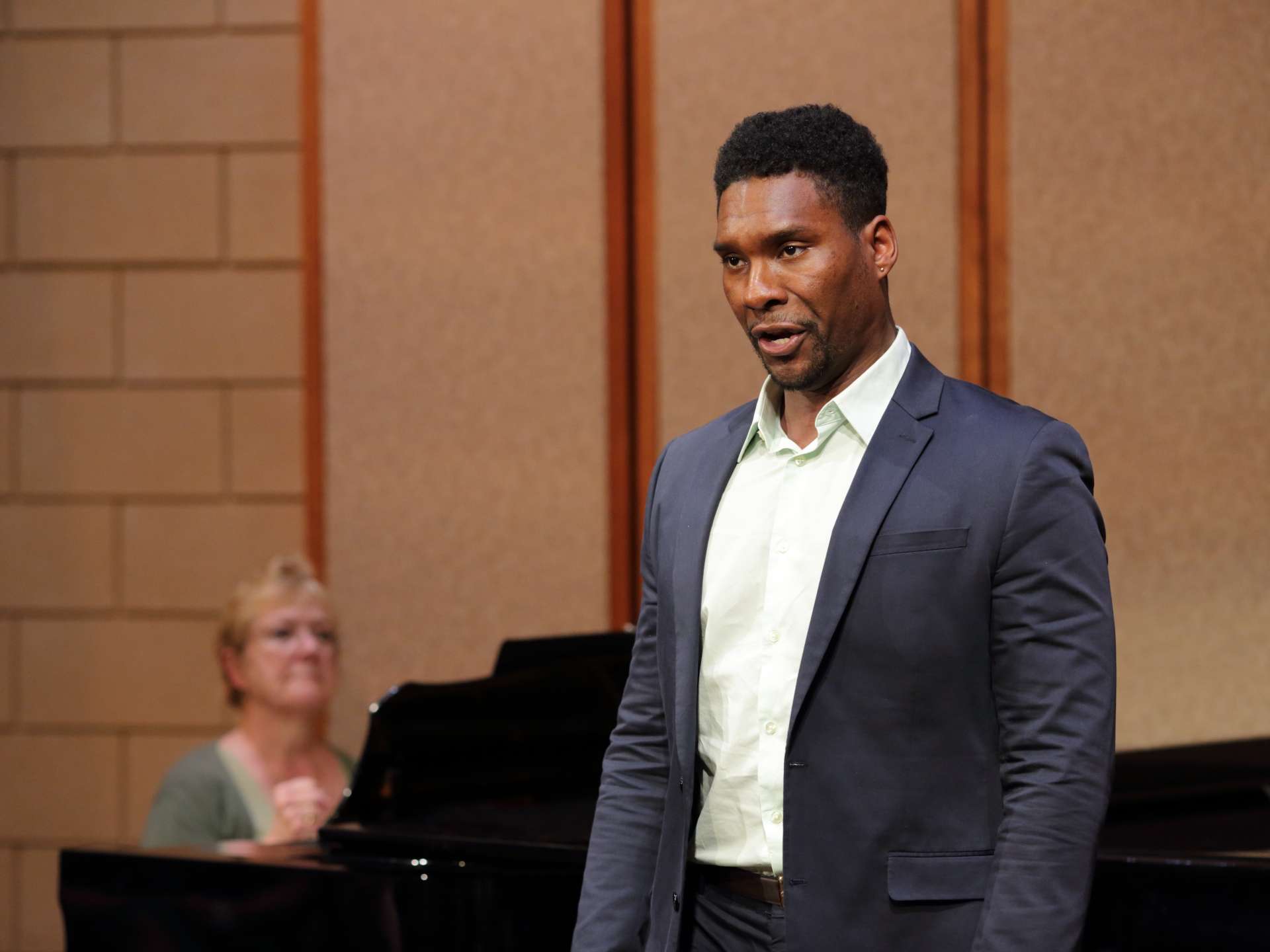 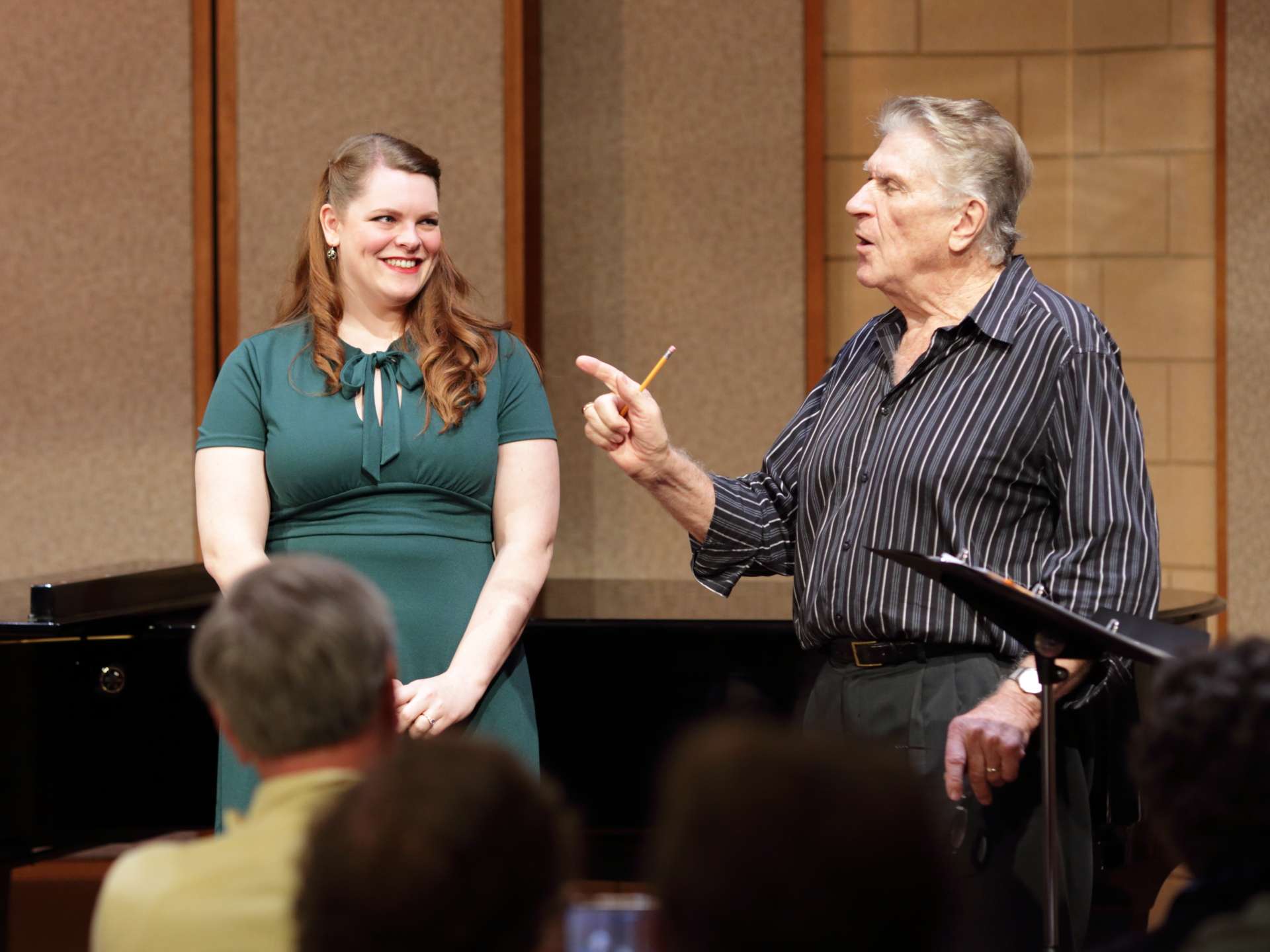 The two years of German I studied in High School have proved very useful for decoding at least a general sense of what is happening in German operas.  But the 8 years of French I studied in middle and high schools has helped me very little to understand operas sung in Italian.  And so when Jenny Schuler sang her aria (Tu che di gel sei cinta from Puccini’s Turandot), I was completely lost as to the meaning of the words.  But the music pulled me (and more than a few others in the audience) to tears.  As it was supposed to–it is the song that Liù sings before killing herself.  A marvelous performance that merely encourage Mr. Milnes to dig even deeper into the possibilities. 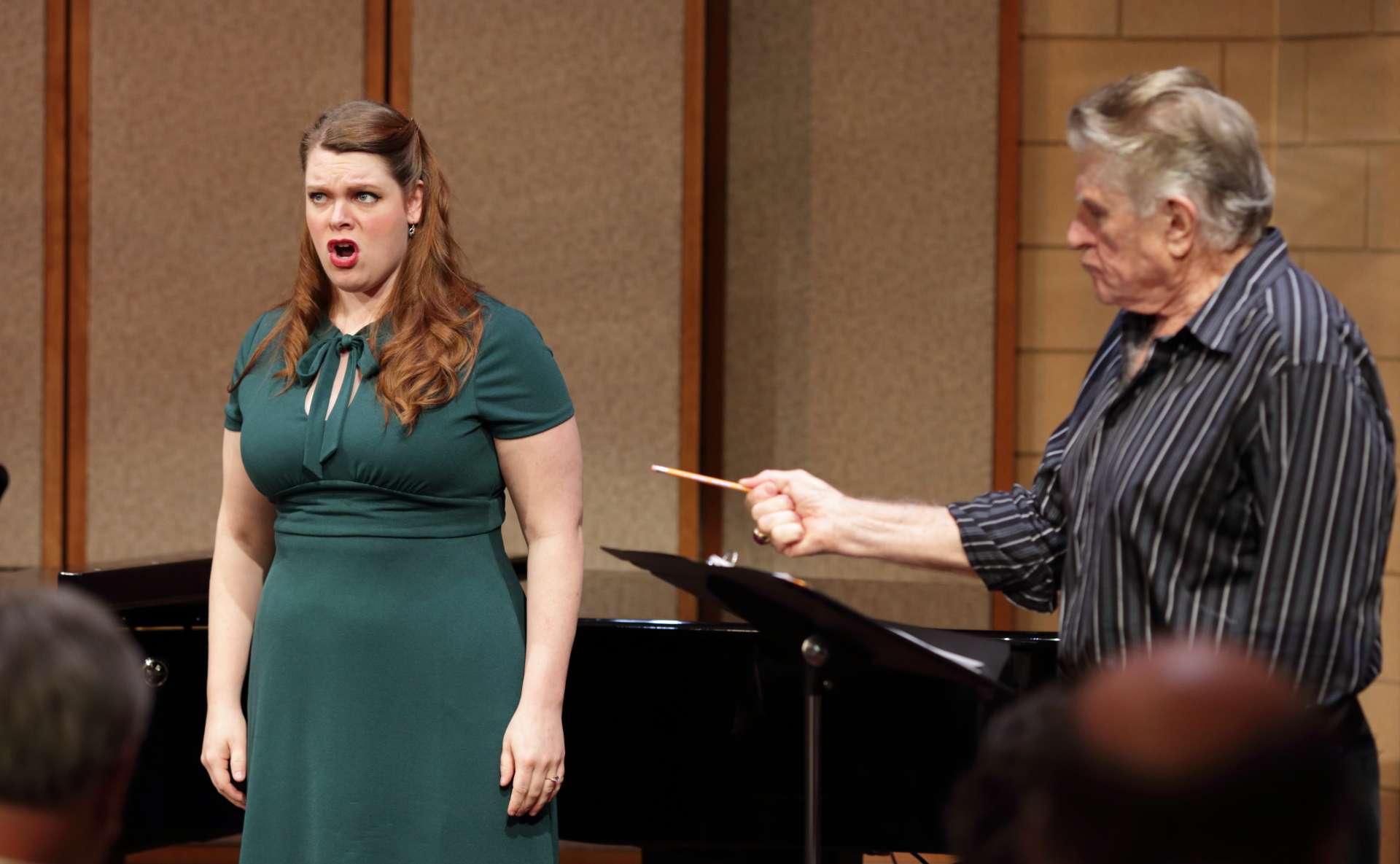 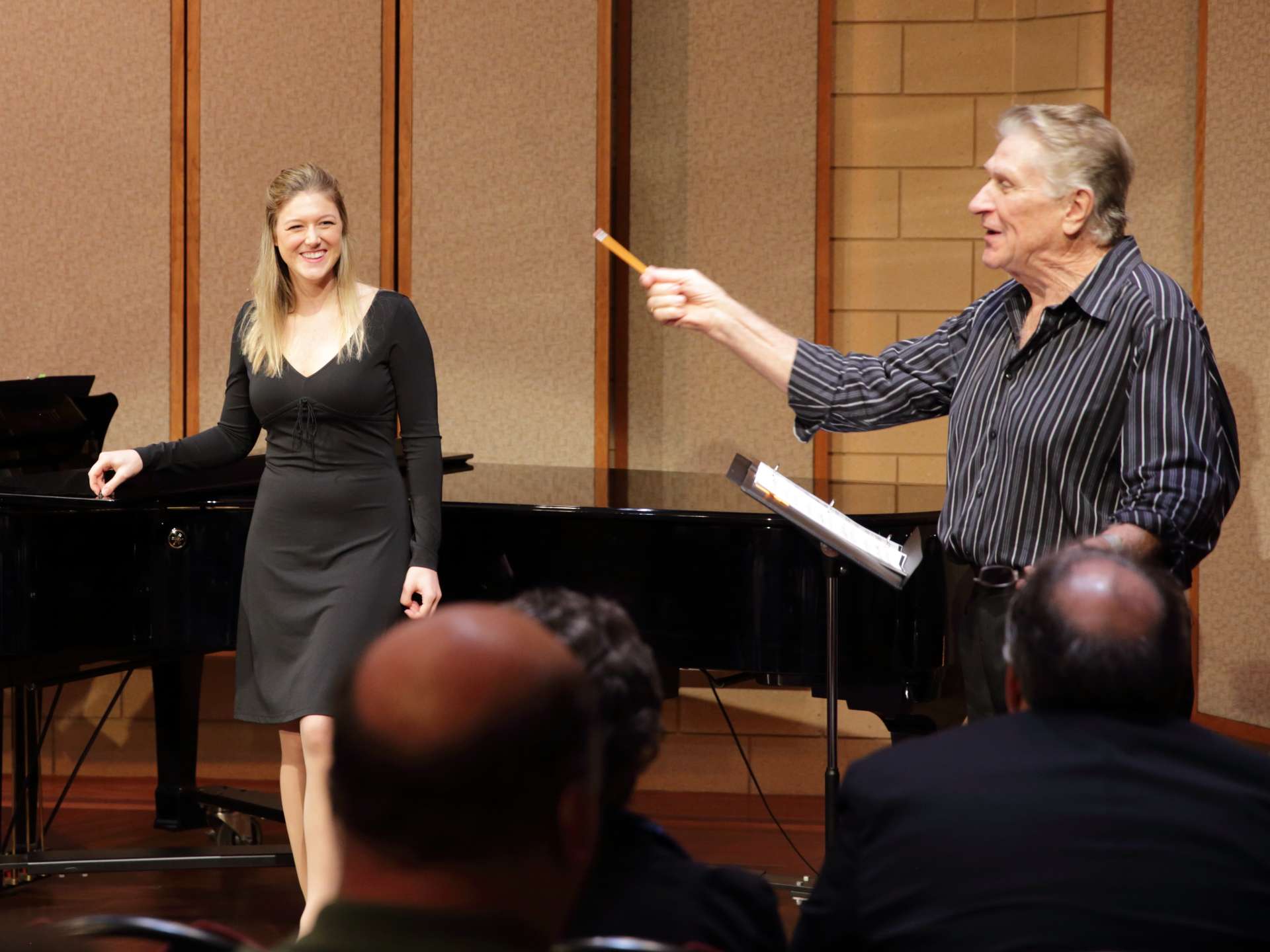 Mr Milnes did not restrict his criticism to the only the students’ performances.  In one exchange, he chided the composer, or their editors and/or publishers, for errors of notation, tempi, dynamics, etc.  He explained that a particular marking in the score was not only redundant but detrimental because of course a jump down to the lowest register of a mezzo-soprano will necessarily be sung more softly than when they are singing in the center of their range.  A piano marking, therefore, may lead one to sing more softly than one should.  He pointed out that any score with a tempo marking is almost necessarily wrong, because the correct tempo with orchestra is almost always slower than a correct tempo with piano accompaniment.  No single tempo covers both cases correctly.  Etc. 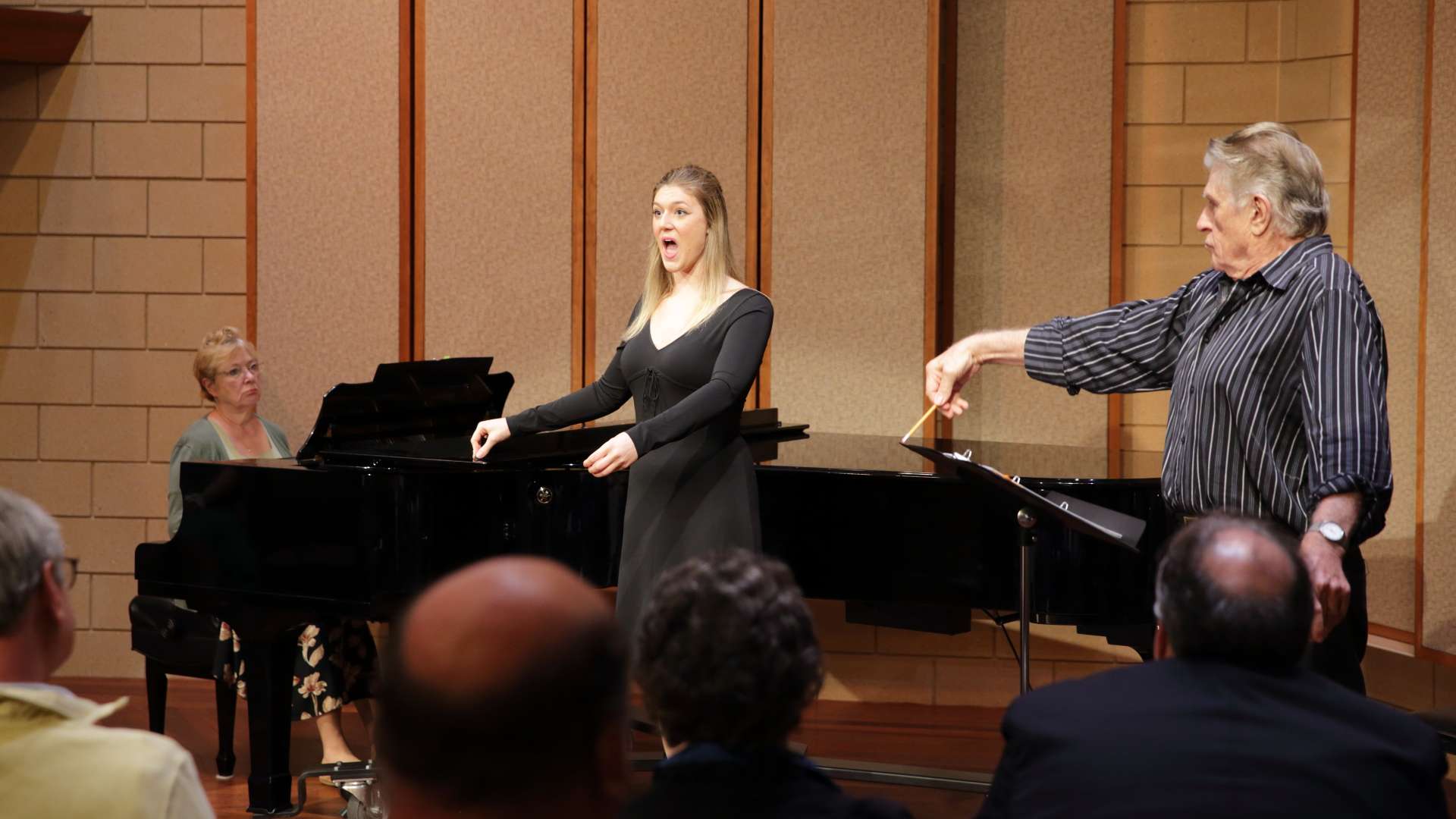 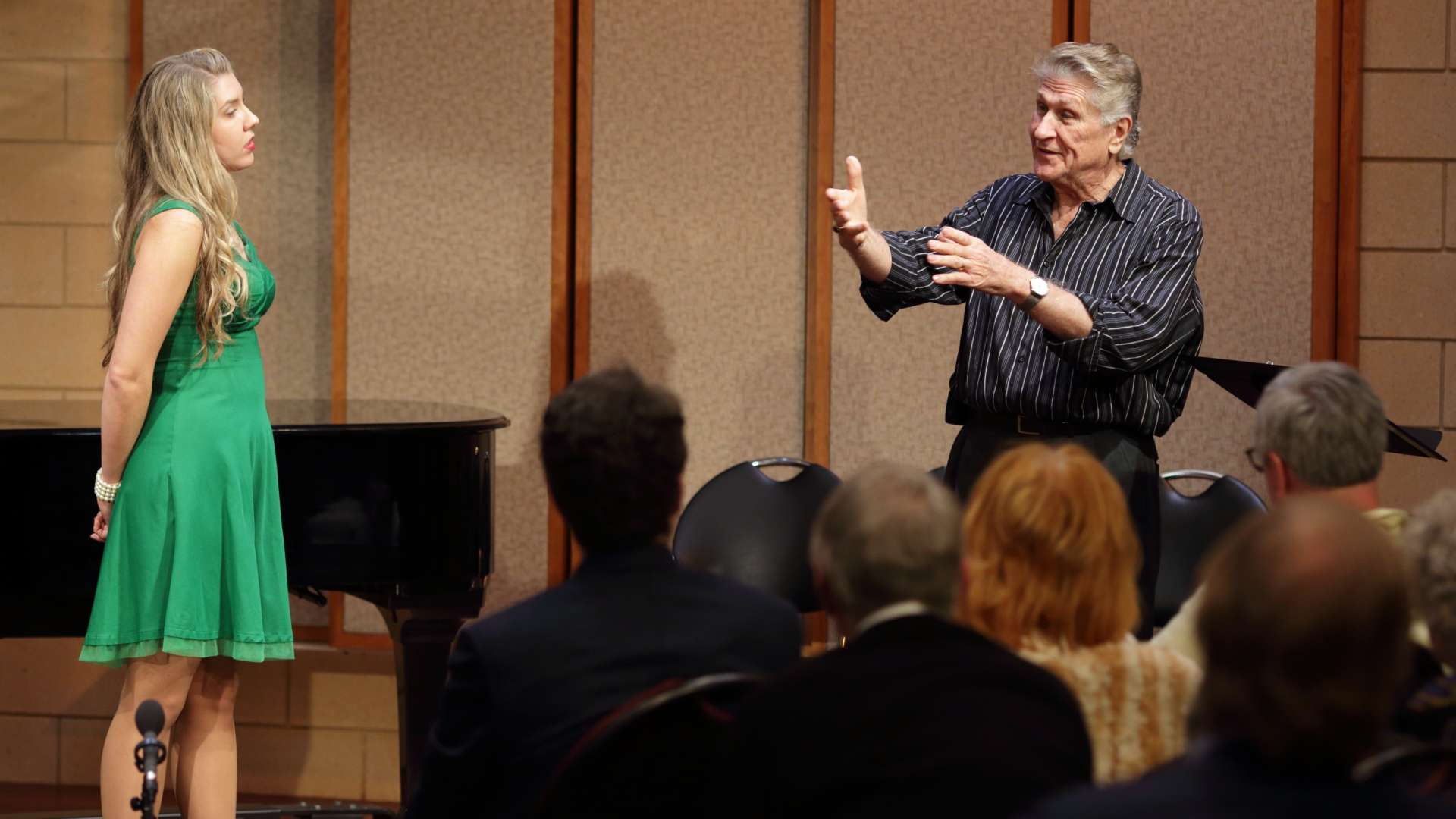 Again and again we witnessed this wonderful process, which begins with a beautiful aria well sung by a well-prepared singer, and is then transformed into something better.  Which ties in a bit to the biography that Mr. Milnes ultimately shared with us at the end of the class.  Namely, that his ladder of success was not based on some thunderstroke of luck that propelled him onto the world stage by winning some prestigious contest.  Indeed, when he did compete in a contest that did propel its winner to New York, he only tied for second place.  In retrospect that was a good thing, because he was not ready.  His voice was not ready. 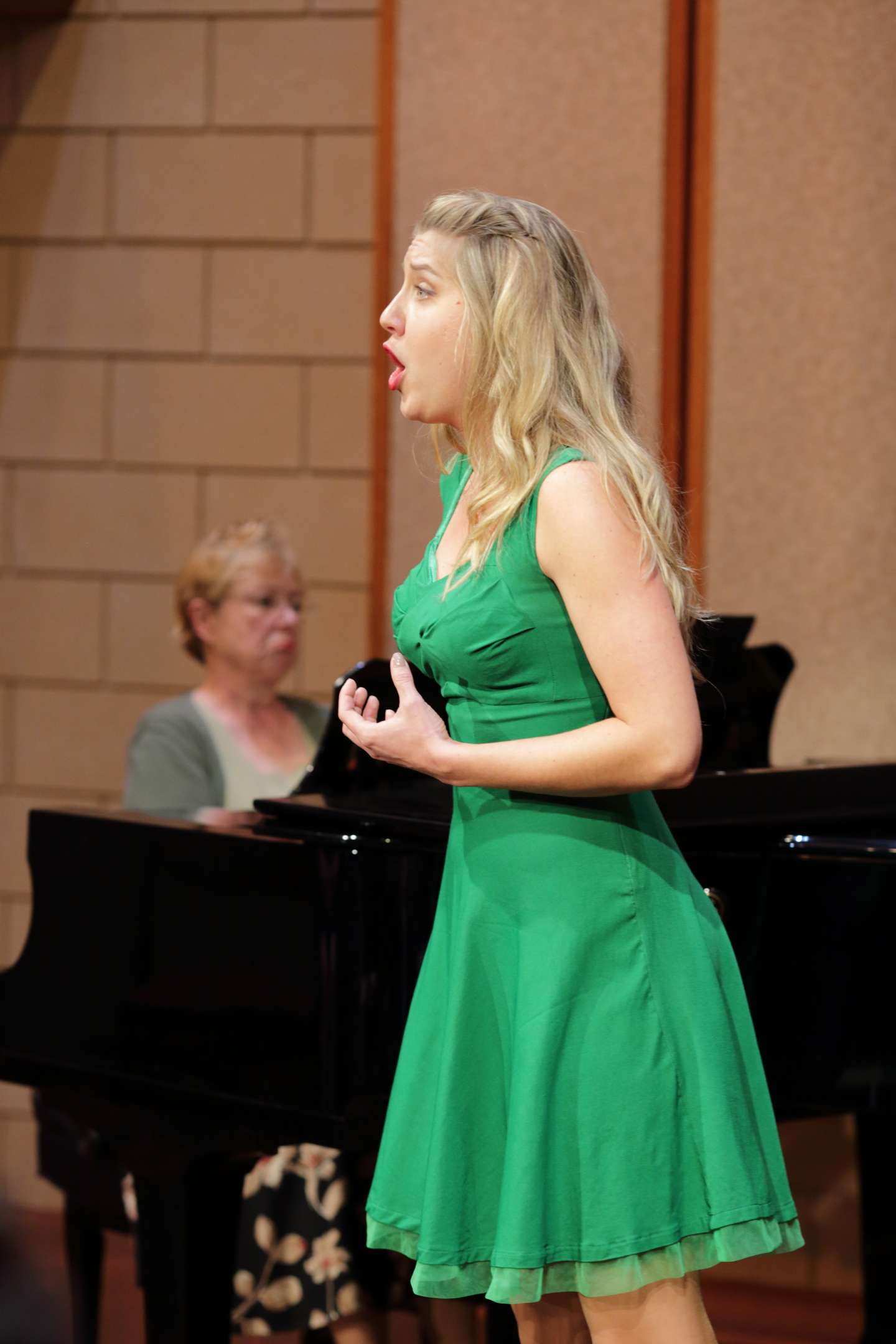 But neither did he quit.  He stayed in the game as a local singer in a Master Chorale.  As he had the opportunity to sing with and observe those who were better than he, he took the opportunity to learn from them: vocal techniques, diction, hand movements, breathing, life and health habits.  Anything and everything that made him both a better singer and a better person.  He decided that when he reached a point that he was no longer improving year over year, then he would quit.  But the plateau never came.  After a few more years of constant and continuous improvement, he was ready…for New York and for the world.  And so today was an opportunity for these Fletcher Fellows to make one day of progress–to be better singers than they were yesterday.  I think we all saw and heard that happen.  I think they did as well.  Mr. Milnes commented that it is unfair that merely being good is no guarantee of success in the world of Opera.  However, if every day one gets better, and if one can keep at it long enough, then one day one can surely be among the best.  We certainly do wish the best for them!  And we are grateful to Sherrill Milnes for lighting their path as they continue in their quest. 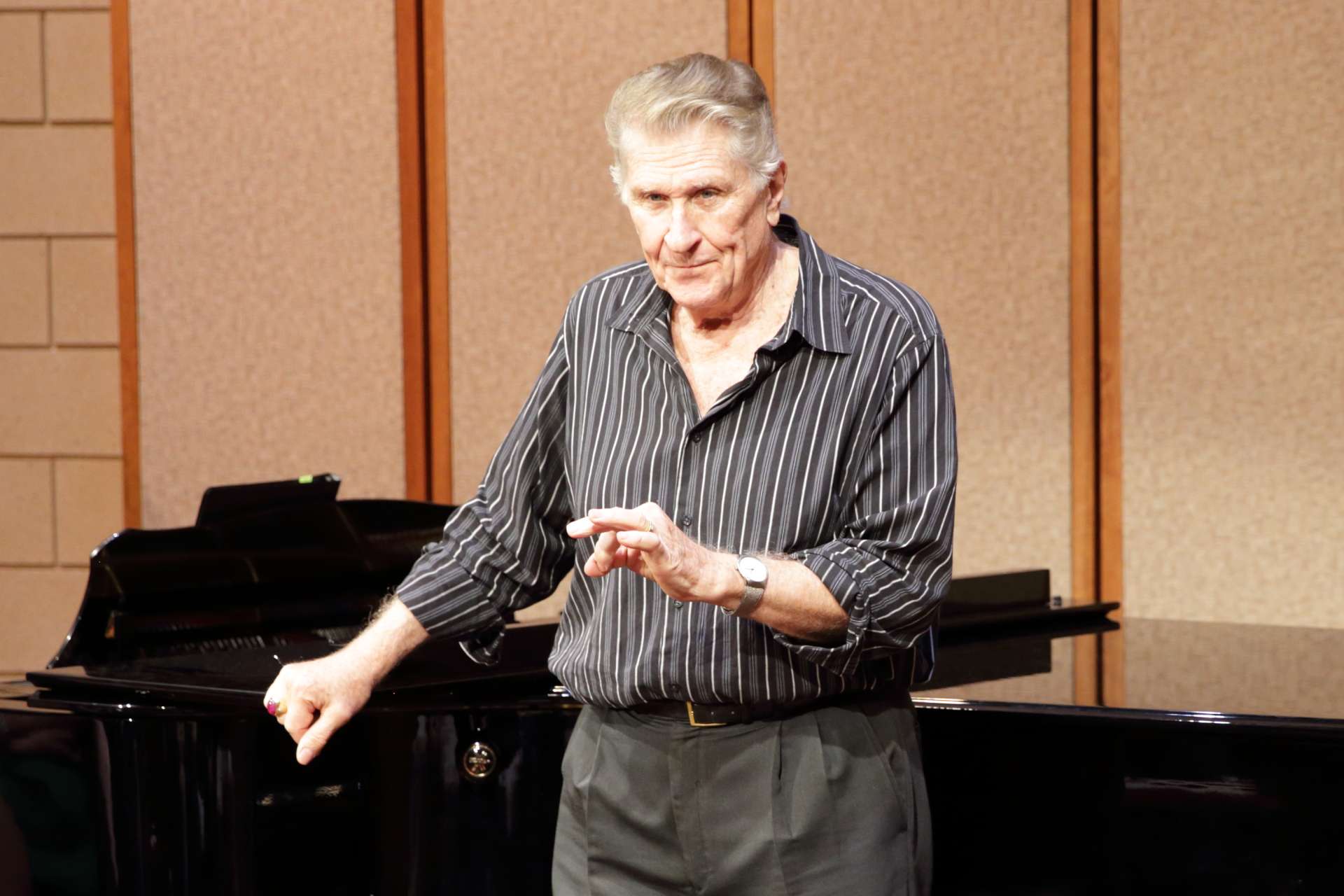